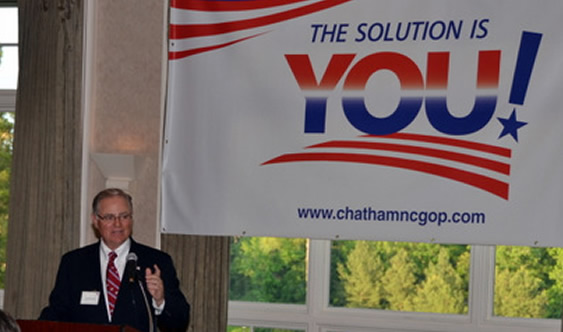 My diligent efforts to bring you the best intelligence and insight into Carolina politics put me into contact with a diverse array of people from across our two states.  Quite a few folks recently have been telling me to keep a close eye on a fellow who is making a  lot of noise — and, apparently, a lot of difference — at the grassroots level:  Chatham County, North Carolina GOP chairman Jim Duncan.

All of this talk piqued my curiosity, so I decided to track Duncan down myself.

His parents were natives of Anderson, South Carolina.  His father, following his military service in World War II, relocated to New York City where he worked as a NYPD detective.  Duncan’s mother took a job on the wait staff at a Howard Johnson’s in the city.  Duncan says he spent the first 12 years of his life in a Queens housing project, but later moved “uptown” to The Bronx.

Duncan arrived in Chatham County to find a dispirited local GOP operation and the county dominated by Democrats.  Duncan said watching Big Barry’s FIRST State of the Union speech offered him an incredible bit of inspiration:

“I saw his arrogance.  I saw him disrespecting the justices of the Supreme Court.  In disgust, I took off my socks and threw them at the TV screen.  At that point, I told my wife ‘We’re getting into politics.’ ”

Observers tell me that Duncan has had a remarkable positive effect on Chatham County’s GOP operation from the beginning.  He  was  a leader in orchestrating a conservative takeover of the county board of commissioners and greater conservative representation on the county school board.  The local party has also experienced great fundraising success, and has been attracting attention from state and national GOP and conservative leaders.

Duncan has knocked heads with Pittsboro mayor Randy Voller, the former county Democrat chairman and current state Democrat chairman, on a number of issues.  While Voller seems to stick with the slash-and-burn style popular with progressives nationally, Duncan sticks with a cheerful Reaganesque “Morning in America” — style testimonial about the successes of conservative reforms on the local level and what promise they hold for the future.

Duncan is also a founding member of The Coalition For American Principles, a non-partisan citizens group devoted to the concept of limited government.

Duncan tells me he has been approached by prominent state Republicans and conservative activists asking him to run for the open NCGOP chairman’s post.  (He’s respectfully declined those overtures.)   Is there a political campaign in Duncan’s future?   Here’s all he’ll tell me:

“We’re making great strides in turning things around here at the local level, and at the state level.  There’s still a lot to do.  As far as running for office goes, we’re going to take a wait-and-see approach.”

One thought on “Jim Duncan: A NC grassroots leader to keep an eye on”