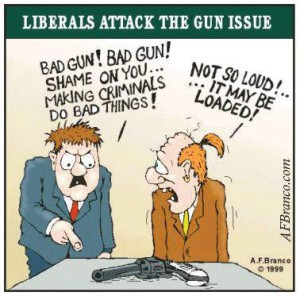 OK, let’s get this straight.  Big Barry wants tighter background checks on gun purchasers in order to “make it a little harder for our kids to get gunned down.”  Lefties in the NC General Assembly are angry about Senator Jerry Tillman’s  charter school legislation because it DOES NOT mandate background checks for job applicants. But there is now legislation pending in the state House, introduced by Democrats, to — wait for it — ban the question about felony convictions on job applications.

Lefties are all excited about not infringing on your privacy when it comes to something NOT specifically protected by The Constitution — like applying for a job —  but want to drop any pretense of privacy for anyone seeking to practice their Constitutional-protected right to bear a firearm.

Big Barry and his sycophant followers are making all kinds of hay over the Newtown school shooting.  But no one is talking about THIS recent case in Texas — where a man went on a STABBING spree at  a Texas college campus.   How would background checks at gun shops or gun shows have prevented THAT?

As an employer, should I not have the right to know if the person applying for a job in my payroll department has been busted previously for financial or other honesty-related crimes?  Making a false statement on a form, and signing your name to it, gives an employer all the grounds in the world to toss an employee out the door.

Let’s see if the mainstream media hops all over this legislation, like they did with the ‘state religion’ resolution.  Let’s see if they call on Democrat leaders to renounce the legislation and pull it from consideration.   (Start holding your breath.)

If you needed evidence that this whole background check thing is nothing more than an incremental effort to disarm the populace,  compare Democrats’ language about firearms purchases versus what they are saying about this bill now before the state House.