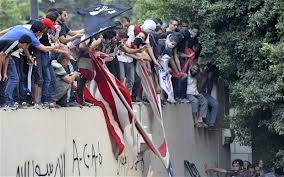 Those poor, poor protesters.  Who knew rioting in the streets, burning American flags, and shouting “Death to America” could be so dangerous?

The N&O — with its long standing rep as an apologist for the North Carolina Democrat Party AND the Reconstruction-era KKK — is running a lead story on its web site today that ACTUALLY attempts to gin up sympathy for those poor, poor folks rioting outside our embassy. *The movie’s death toll is on the rise! *

How about a story on the bloody handprints on the walls inside our Libyan embassy?

(To top it off,  the name “Mohamed Safed” of the Associated Press is in the byline.)  The four-paragraph story included credits for “additional reporting” by FIVE additional people.  SIX PEOPLE to write four paragraphs!

If this media had been around in 1941, we’d have been reading stories apologizing for the US interference with those Japanese “military exercises” in Hawaii on December 7.   We’d probably have seen stories moaning about the “tragic” deaths of those Japanese pilots.