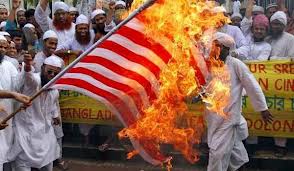 Disciples of Candidate Hussein Obama — inside and outside of the media — are STILL sticking by this nonsense that the violence against Americans and US embassies around the world is in response to  a movie.  The fact that it all started on the 11th anniversary of 9/11  was just a coincidence, I guess.

In 2008, Candidate Hussein Obama derided Christians in some parts of the country as “bitter clingers.” Now, we’re being told to show the utmost respect to these Muslim folks “expressing their outrage” over this documentary.

So, if what these people are doing is OK — is it all right for us to riot outside the offices of Carsey-Werner for giving us all those years of “Roseanne”?

In the wake of the attack on the embassy in Cairo, the State Department actually apologized to the mob for the fact that this movie got made.

In the 1990s, when terrorists bombed the World Trade Center and our embassies in Africa, Bill Clinton sent in the FBI and Justice Department lawyers.  When terrorists flew planeloads of innocent people into the World Trade Center and The Pentagon, George W. Bush sent in Delta Force and The Seals. Now, when mobs kill our ambassador, overrun our embassies, and burn and deface our flag, Candidate Hussein Obama and Hillary apologize to them.

The only thing these people — and their 12th century mentality — understand is violence.   You can’t reason with them.  If they commit acts of violence against us, we need to — in the words of Russell Crowe in Gladiator — “unleash hell.”

This is yet another illustration of the stark choice we face in November.