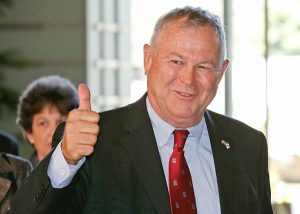 A lot of you may not know much about this obscure California congressman.  He’s been around DC for a while.  He’s in the Walter Jones — Thomas Massie — Justin Amash camp on a lot of issues that come before the House.  When his name popped up on the radar as a potential secretary of state for Donald Trump, many faux news drive by heads started to explode.  We started to get pieces like THIS painting Rohrabacher as a nut.

I couldn’t disagree more with that take. Rohrabacher is right in line with an awful lot of what those of us who fought in the trenches for so many years for Ronald Reagan, Jesse Helms, and Donald Trump have held dear.

I, for one, would not lose ANY sleep over the idea of Secretary of State Dana Rohrabacher.  I think he fits in perfectly with Trump’s shake-it-up agenda.