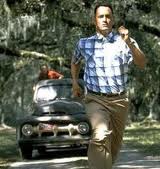 Far too often in business (and other areas of society), when someone does something that WORKS, you get all kinds of other folks doing something pretty doggone similar.  Amazon rolled out its Kindle e-reader to great success, and now TONS of other companies have  an e-reader.    Apple was an innovator when it launched its touch-screen technology on its first iPhone.  Since then, you’ve had all kinds of other phone manufacturers launch touch-screen phones that act — and sometimes look — a lot like the iPhone.  You see it in Hollywood quite a bit, too.

We may be seeing this copycat trend popping up in North Carolina politics.  Republican lieutenant governor candidate Dan Forest has had a lot of success with his “Run, Forest, Run” slogan.

Now, it seems, the campaign of his GOP rival in the July 17th runoff — Tony Gurley — has rolled out a new campaign slogan:  “Go, Gurley, Go.”