We had a GOP takeover of the General Assembly which showed promise of introducing fiscal sanity to state government.  The 2011 budget debate had leftists hollering about mean old Republicans starving seniors and dumbing down school kids.  Republicans were crowing about that budget being a good first step.

My, how a year changes things.  So far, it looks like we’re in for a budget that spends more than last year — and may rival what the Democrats did when they were in charge.  The John Locke Foundation has already signaled its disappointment, and now Civitas is sounding off:

Last Friday, Civitas analyzed the budget proposals put forth by the five major state General Fund appropriation committees that make up the majority of the General Fund. The analysis found plans that would increase spending in those agencies by $436 million above the spending level approved for the coming budget year in last year’s biennial budget. This raised the question of where the extra money is coming from.

The spending hike will be financed largely by additional revenue that was unanticipated when the budget passed last year. $438 million in unspent monies and revenue surplus from the current fiscal year play a large role – with $216 million going to plug the current year’s Medicaid shortfall ($154 million) and help shore up the state’s Repairs and Renovations reserve account ($62 million).

Moreover, the House budget anticipates an additional $41 million in judiciary fees above what was projected last year, along with $22 million in extra “other” non-tax revenue collections not incorporated in last year’s budget plan.

And as noted in the previous article, the House budget taps into an extra $42 million in state lottery funds, as well as $30 million from the One NC Fund, in order to put the spending plan into balance.

Relying so heavily on one-time funding sources to help balance a budget consisting largely of recurring expenses is to repeat a risky mistake made many times in the past.

House budget writers also raid the $121 million in funds set aside last year into a “Compensation and Performance Pay” reserve fund. The reserve was established last year as a measure to fund a new system of merit pay for state employees, including teachers. Instead, the House budget would use $79 million of those funds to distribute a one-time, across the board $250 bonus to permanent teachers and state-funded employees. The “performance pay” initiative is a praiseworthy one; it is unfortunate that House budget writers want to de-fund it before it is even implemented.

Furthermore, the House budget reduces by $62 million the state contribution to the state employee and teachers pension.  The move is justified by a change in the actuarial valuation of the pension plan at the end of 2010, showing the pension plan to be fully funded. However, with such volatility in the market, and given the fact that just three years ago the state Treasurer was advising state budget writers to allocate hundreds of millions of additional funds to help shore up the pension, this also seems like a very risky move. Potentially shortchanging a long-term obligation like the state pension fund for a one-time money grab is not a very fiscally conservative strategy.

The release of the full House budget plan answered several questions about revenue sources. Disappointingly, those answers reveal a band-aid approach of patching the budget together with one-time funding sources and a lack of any meaningful spending reform. […]

Amid this fiscal frenzy, it appears there was some opportunity for fun.  One of the   Honorables, who regularly soaks in the wisdom disseminated by this site, took a photo demonstrating what he described as  a “practical, efficient use  for Bev’s budget” : 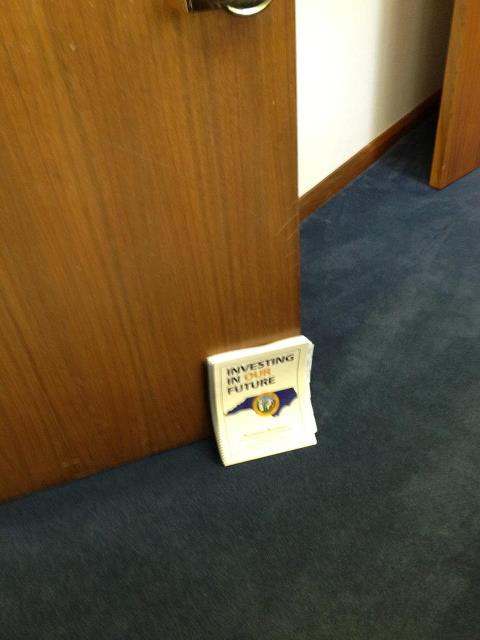 One thought on “As The Budget Busts: the expensive soap opera being rolled out by Jones Street studios”