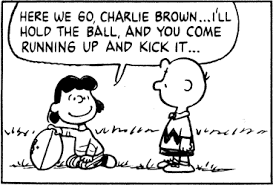 We all remember the famous cartoons from our childhood.  Lucy was always faking sincerity — promising to hold the football for Charlie Brown to kick.  Every time she would convince him to try and kick it, she would pull it away at the last minute and he would crash to the ground in pain.

It seems like Republicans in Washington and Raleigh have been acting a lot like Lucy lately — dangling a lot of conservative talk in front of us, and then yanking it away when it comes time to walk the walk.   ObamaCare, spending, amnesty, late-term abortion. The list keeps growing by the day.

Remember the sellout on the horrid, putrid CRomnibus at the end of 2014?  Congressional leaders PROMISED us that they would use their newly-won majorities in 2015 to work the power of the purse and kill Obama’s amnesty decree.  Just like how — in 2010 — they promised they would break their necks to KILL ObamaCare if they got the majority.

Well, here we are in 2015. And once again, we got played.  John Boehner went back on a strategy he, himself, devised.  The speaker allowed a clean funding bill to go forward in the House that gives Obama what he needs to finish implementing his decree of amnesty for all illegal aliens.   All of the Democrats — and only 75 Republicans — voted for it.  The funding measure passed the House with all the Democrats and LESS THAN HALF of the Republicans.

Renee Ellmers, Robert Pittenger, and Patrick McHenry all kept their noses firmly implanted in John Boehner’s posterior and voted to approve full-funding for AMNESTY and OBAMACARE.  (HERE IS THE FULL ROLL CALL VOTE  Reps. Meadows, Jones, Hudson, and Walker were the ONLY NCGOPers to be consistently right on this issue — voting against the one week extension of funding AND the full-funding measure.

So now, there is no longer a political option for halting amnesty for illegal aliens. We can try the courtroom angle, but look at all the damage that can be done to our country while waiting for the issue to move through that maze.  What do you do when your “representatives”  no longer represent you?  Dropping out and giving up doesn’t work.  The establishment would love it if you would stop griping, keep voting for them, and writing them checks. (Actually, with all of the new voters amnesty creates, they could probably care less whether you continue to show up and vote.)

At some point, we have to ask ourselves: How many more times will we keep letting the GOP hold the football for us?  We give them our votes and our money, and they screw us over time and time again.

You can try to take over the party and affect change that way.  County parties are holding their conventions this month.  Go to your precinct meetings and get yourselves and like minded friends elected to leadership roles.  Then, go to the state convention and work some magic there.  If you want to stay with the GOP, this is the only way to get things back on track.  The crowd in charge now has made it clear they have no intention of listening to us or even taking us seriously.

9 thoughts on “How long will we keep being Charlie Brown?”