Barry Obama likes it.  Renee Ellmers likes it.  John Boehner LOVES IT.  So does Nancy Pelosi.  (We should ALL be worried.) 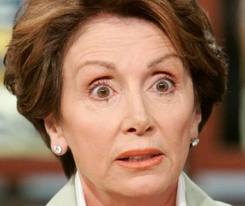 We’re talking about the SGR replacement “doc-fix” legislative deal brokered by US House speaker John Boehner and Democrat leader Nancy Pelosi. Never mind that conservatives like The Club For Growth have raised red flags about the deal, talking about how it contains a $130 BILLION shortfall and will add $400 billion to the national debt over 20 years. Establishment Washington is beside itself:

Responding to critics who say the Medicare doctor pay bill passed in the House Thursday will only add to the nation’s debt, North Carolina Republican Rep. Renee Ellmers tells Newsmax TV that the bill will actually create savings.

The Medicare bill passed the House 392-37, with strong bipartisan support and it will fix the way doctors are paid through the Medicare system. The current system was put in place in 1997. The American Medical Association has pushed for changes to the payment system for years.

However, some have criticized the bill, citing the Congressional Budget Office (CBS), which has reported that the measure will add $141 billion to the federal deficits in 10 years and $500 billion in 20 years.

Ellmers told Ed Berliner on “MidPoint” on Thursday that critics are “using the wrong metrics.”

[…] “They’re not looking at the situation in the true factual sense, and what they’re depending on are CBO scoring numbers. CBO is just a static picture of cost,” she explained. “It can’t look at the savings that will come from them into the future.”

According to the North Carolina Republican, “we are going to see the savings within the 10-year window, but you have to put the process in place first before you can actually get that picture 10 years from now.”

“To those critics, they can continuously look at this as a problem. They’re the first ones who will get up, and they will tell you that entitlement spending is what drives the debt in this country, but when they’re presented with the opportunity to fix that problem, they don’t want to take it,” Ellmers said. “They’re problem driven, not solution driven.”

The Republican lawmaker, who is a registered nurse, said that the reason the bill is important is “because for over a period of 17 passes, which is over about a period of 12 years, we’ve actually spent about $170 billion of taxpayer dollars just trying to pass this to make it work from year to year . . . just to keep the system going.”

She explained that “what we finally realized was the structural change that is really needed. It’s based on a formula. It’s based on the sustainable growth rate (SGR) of the economy, or the GDP.

“When you’ve been in an economy like we have been in for so long, you can see how that formula faltered and we just continuously tried to really put on a billion dollar band-aid because it didn’t fix the problem, it just perpetuated the problem and now we have gone in with meaningful solutions to this problem,” she said.

Also — ” an economy like we have been in for so long”?  Tell us, Barbie, what type of policies and decisions have put us in this predicament in the first place?  Who’s responsible?

“Now we will be able to start to make those changes within Medicare that we all know are the drivers of our debt in this country,” she added.

What? Can anybody translate this?  It sounds like she is hoping for changes that will “drive” debt in this country.

Other critics of the bill have also said that it will require that seniors pay more into the system. The plan requires that seniors who make more than $133,000 per year pay more for their health insurance premiums and prescription drug coverage, starting in 2018.

However, Ellmers told Newsmax that the bill was written after talking to seniors about changes they would like to see made to the system.

“We’re responding to the conversations we’ve had over time with so many seniors who have said, ‘I have an income that puts me kind of in the wealthy category, I can pay a little bit more for my Medicare, where someone else can’t,'” she explained. […]

Renee glosses over the fact that this legislation reauthorizes CHIP — the federal Children’s Health Insurance Program — which has taxpayers picking up the health care tab for “kids” up to age TWENTY-SIX.

Once again, Reps. Walter Jones and Mark Meadows were the only voices of conservative, limited government common sense from our delegation.  They were the only members from The Tar Heel State to vote NO.