On June 1, John Hood — North Caroiina’s ”Mr. Conservative” — was proudly proclaiming that people know much better than government how to spend their own money.  (We agree with him on that point.) 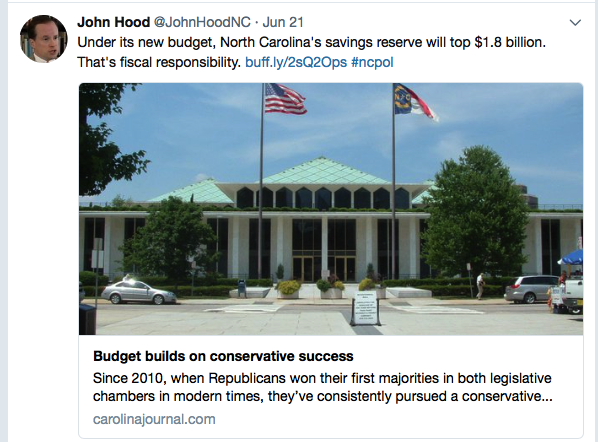 For-profit businesses aim to create profits or “rainy-day” funds for expansion down the road. The conservative mindset — the common sense take — is that government is a zero-sum game.  Establish budgets for basic needs

and then appropriate funds to those needs based on past experience.  You fund your needs and end up with zero in the bank at the end of the year.  You live within your means — spend exactly what you take in.

Government can’t save money like we do in our families and businesses.  They can’t.  (Social security “lock box” / “trust fund” anyone?)   Put money in front of politicians and bureaucrats, and they WILL spend it.

If government ends up with more money than it needs to conduct its affairs, it’s clear that it has over-taxed its citizens.   How do you, on one hand, claim that “people know best how to spend their own money,” but then praise the creation and expansion of government “rainy day funds” or “savings” ?

How is holding nearly TWO BILLION DOLLARS of  other people’s money more than you need conservative?

This current budget sitting on Roy Cooper’s desk spends even more money than last year and the year before and is loaded with pork.   The same crowd that loudly proclaims that people know better than government how to spend their money has — in that very same budget — delayed tax cuts to 2019.

2 thoughts on “Government “savings” is NOT conservative”