This week marked the second anniversary of the January 6th episode at the US Capitol which heralded arguably the greatest abuse of federal law enforcement power ever.   Attorney General Merrick Garland – who Obama tried to get onto the US Supreme Court – did his best to keep the flames fanned:

U.S. Attorney General Merrick Garland honored the five Capitol Police officers on Thursday who, he said, died after defending the legislature from the January 6 riot in 2021 — though none were killed during the violence.

In a statement on the second anniversary of the Capitol riot, Garland appeared to link the riot to the deaths:

“Two years ago, the United States Capitol was attacked as lawmakers met to affirm the results of a presidential election. Perpetrators attacked police officers, targeted and assaulted members of the media, and interfered with a fundamental element of our democracy: the peaceful transfer of power from one administration to the next.

“Since then, countless agents, investigators, prosecutors, analysts, and others across the Justice Department have participated in one of the largest, most complex, and most resource-intensive investigations in our history. I am extremely grateful for the dedication, professionalism, and integrity with which they have done this work. This investigation has resulted in the arrest of more than 950 defendants for their alleged roles in the attack. We have secured convictions for a wide range of criminal conduct on January 6 as well as in the days and weeks leading up to the attack. Our work is far from over.

“We will never forget the sacrifice of the law enforcement officers who defended the members of Congress and others inside the Capitol that day. And we will never forget the five officers who responded selflessly on January 6 and who have since lost their lives: Officer Brian Sicknick, Officer Howard Liebengood, Officer Jeffrey Smith, Officer Gunther Hashida, and Officer Kyle DeFreytag.

Officer Sicknick, who lay in state in the Capitol after his death, was found to have died from natural causes.

Garland’s statement did not mention other deaths, including that of Ashli Babbitt, who was shot by a plainclothes officer as she tried to climb through a broken window in a door inside the Capitol during the riot.

The now-closed January 6 Committee, which Democrats used to blame former President Donald Trump for the riot, falsely claimed during its highly orchestrated proceedings that police officers were killed during the riot.

Sources within the Department of Justice suggest that Garland has pulled personnel from investigating other crimes to focus on investigations relating to the Capitol riot. Many participants in the events of that day have spent months in jail awaiting trial and have received long sentences on conviction, often for non-violent crimes.

Meanwhile,  the deaths of several unarmed citizens that day continue to be ignored.  We all saw the horrific murder of Ashli Babbitt on video. Nothing happened to the Capitol Cop who did the deed. 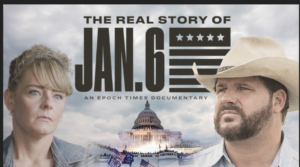 The Epoch Times’s fantastic documentary on January 6th showed us and told us about two men who died during the protest.  Police body-cam video from the day shows two cops giggling over hitting protesters with concussion grenades.  Those grenades CAN set people on fire if they are hit by them.

Two men who got hit by those police-launched grenades got set afire, and later died of cardiac arrest on January 6th.  That makes THREE.

The Epoch documentary showed us video of a woman who had been trampled during a confrontation between police and the protesters near the Capitol Building.  She laid there on the ground – not moving – for some time.  The video shows a black female Capitol officer emerging from the building to repeatedly strike the unconscious woman with a nightstick.  The beating recipient, of course, died.

Add those videoed outrages, plus the apparent agitating of violent confrontation by the Capitol cops, and you have a horrible travesty you’d expect to see in the lowest of Third World banana republics.  Not the capital of the free world.

Yet, our top law enforcement officer, Garland, has nothing to say about four dead citizens likely killed by police misconduct.  The lives of Trump fans apparently don’t matter much to the regime.  God help us.