Not long after winning a new term in 2012 — unopposed — attorney general Roy Cooper announced he was running for governor.  No, he wasn’t going to step down and run full-time.  He was going to keep drawing his government check AND campaign (at the same time).

And that is about all we’ve got from our elected attorney general.  We’ve been paying him to campaign for governor for nearly four years.  The attorney general is — in essence — the chief advocate or defense counsel for the people of North Carolina.  Yet, we’ve had instance after instance where ol’ Roy has said he’s simply not going to have any of that.  *He’s got a governor’s race to run!*

He told us he wasn’t going to defend an appeal of the marriage amendment to the state constitution.  He balked at defending against an appeal of the voter ID law.  Cooper refused to join a friend of the court brief in support of a Virginia s

chool district being forced by the Obama administration to convert locker rooms and restrooms to gender-neutral. AND he’s refusing to defend HB2.  All while WE are paying him.

Oh, he’s appealed a few things — like the Choose Life license tags and the abortion ultrasound law — while simultaneously sending out campaign mailings bashing said laws and those like them. This is OUR lawyer.  Imagine if you were a defendant in a court case, and your lawyer kept stepping out into the hallway to tell the media things like: “Oh, I am his lawyer, but he’s kind of a weirdo, and I think he may be a little on the guilty side.” 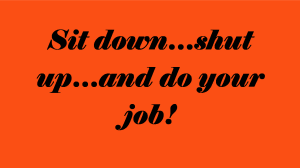 appeals.  Of course, the driveby media puts out snooty articles like THIS slamming the Republicans for daring to hire lawyers to handle the appeals.  Well, what are you SUPPOSED to do when your lawyer won’t actually lift a finger to help you?

We’re not going to lie.  We here at the Haymaker have had more than our fair share of disagreements and complaints over the McCrory administration. But at least he’s made an effort to at least pretend to do his job.

In the private sector, you’d be thrown out on your butt for behaving like Cooper has behaved.

But he and his clique think he NEEDS a promotion and at least four more years living on our dime. Cooper wants us to believe he’s going to “fight” for US while he’s governor.  How are we supposed to believe that when he hasn’t come close to doing it as attorney general?

3 thoughts on “Freeloadin’ Roy getting a free pass”