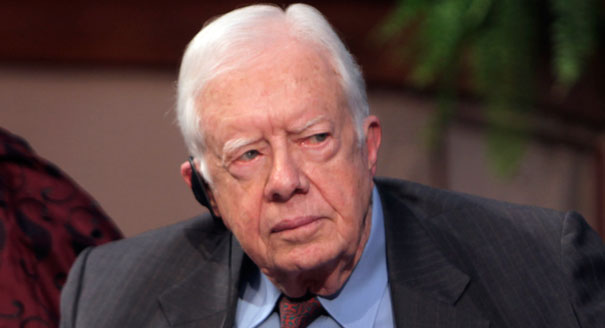 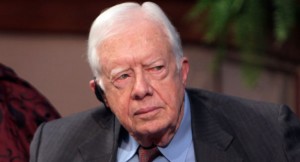 Until now, Jimmy Carter has been widely regarded as the worst president EVER to reside at 1600 Pennsylvania.  (BarryO, the Carter family can’t thank you enough for taking this monkey off their back.)

In Raleigh, and other capitals around the country, Democrats have been ranting and raving about rather reasonable voter ID proposals.  In Raleigh, Boss Bev and her hench-persons in the legislature have cried racism and raised the specter of Jim Crow to counter GOP efforts to codify into law the idea of showing an ID to prove who you are when you show up to vote.   Veteran political reporter John Gizzi, with Human Events, has some advice for Republicans trying to counter these ridiculous racism accusations:  Throw Jimmy Carter at the caterwauling Democrats.

… The partisan nature of the debate nationwide is best characterized by Bill Clinton attacking Republican governors and state legislators for what he calls their “disciplined, passionate, determined effort” to pass voter ID legislation.

“There has never been in my lifetime, since we got rid of the poll tax and all the other Jim Crow burdens on voting, the determined effort to limit the franchise we see today,” Clinton told the Campus Progress National Conference in Washington, D.C., in September.  “[Republicans] are trying to make the 2012 election look more like the 2010 election rather than the 2008 election.”

But Republicans in search of a Democratic voice in favor of voter ID may have one in another former President: Jimmy Carter.

In an op-ed feature in the the New York Times (Feb. 3, 2008), co-authored with former Secretary of State James A. Baker III (a Republican), Carter noted the controversy in state legislatures over the voter ID requirement issue.  Recalling their co-chairmanship of the Bipartisan Commission on Federal Election Reform in 2005, Carter and Baker concluded that “both parties’ concerns were legitimate—a free and fair election requires ballot security and full access to voting.”

In order to bridge the divide between Republicans and Democrats on this issue, the two senior statesmen of the major parties proposed “a uniform voter photo ID based on the federal REAL ID Act of 2005 [which made drivers’ licenses a legal identification for “official purposes,” such as boarding airline flights or entering federal buildings], to be phased in over five years.

“To help with the transition,” wrote Carter and Baker, “states would provide free voter photo ID cards for eligible citizens; mobile units would be sent out to provide the IDs and register voters.”  They also noted that of the 21 members of their commission, only three dissented from this proposal.

The former President and former secretary of state went on to cite a study by American University’s Center for Democracy and Election Management led by Robert Pastor, former diplomat and Carter appointee.

“The center found,” they wrote, “that in three states with ID requirements—Indiana, Mississippi and Maryland—only about 1.2% of registered voters lacked a photo ID.”  While Carter and Baker agreed that the finding that so few voters lacked photo ID was “pretty good news,” they also agreed it was “bad news” that groups least likely to have photo ID “were women, African-Americans and Democrats.”  Writing in ’08, they concluded that “[t]he recent decision by the Department of Homeland Security to delay putting in place the REAL ID Act for at least five years suggests that states should move to photo ID requirements gradually, and should do more to ensure that free photo IDs are easily available.” …

Legislative Republicans in Raleigh need to haul out Carter’s words when they override Bev’s veto of voter ID legislation earlier this year.