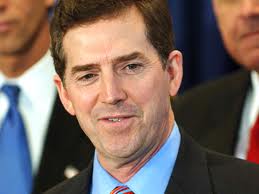 No one can accuse South Carolina’s U.S. Senator Jim DeMint of being a typical Washington politician — wetting his finger and holding it up to see which way the wind blows:

You can accuse U.S. Sen. Jim DeMint of being Scrooge, but you can’t accuse him of only talking the talk.

DeMint, among the most stringent anti-spending lawmakers, was the only senator last week to vote against a bill giving employers tax breaks for hiring military veterans.

The legislation, part of the jobs package that President Barack Obama sent to Congress in September, passed the Senate by a 94-1 margin in a vote symbolically set on the eve of Veterans Day.

The measure, which the U.S. House is expected to pass soon, gives employers tax credits ranging from $2,400 to $9,600 for hiring unemployed vets and keeping them on the job for at least a year.

The bill also provides job counseling, training and placement assistance with a focus on vets who’ve been unemployed for long periods.

“We’re pandering to different political groups with programs that have proven to be ineffective,” DeMint said on the Senate floor. “All Americans deserve the same opportunity to get hired. I cannot support this tax credit because I do not believe the government should privilege one American over another when it comes to work.”

Democrats were quick to criticize DeMint.

“We’re glad it passed overwhelmingly, but it’s hard to think of a single reason for anyone to oppose a tax cut for veterans except politics,” said Brian Fallon, a spokesman for the Senate Democratic leadership.

DeMint, a Greenville Republican, said he understands his vote could hurt him in a pro-military state with a large number of veterans.

“I’ll probably get accused of not supporting veterans by the politicians pandering for their votes, but I’m not going to be intimidated into voting for something that may make sense politically but is inherently unfair and isn’t going to work,” DeMint said.

DeMint said the jobs measure isn’t the right way to express gratitude to the nation’s veterans.

“I’m thankful for their sacrifices to protect equal opportunities and freedom in America,” he said. “But we don’t pay them back for their service and sacrifice with false promises of programs that have proven not to work.”

Is a tax credit REALLY a tax cut?  You still have to send your money to the IRS.  Once you do that, bureaucrats will examine your behavior and decide whether you deserve to have some of your money kicked back to you.   If you’re SERIOUS about tax reform and boosting the economy, cut government spending, roll back regulations,  AND cut the actual tax rates.  (Yeah, I’ll hold my breath.)

After they pass this, we’ll hear a bunch of moaning from Congress about too many tax cuts and the need for MORE money.

Thank you,  South Carolina, for giving us Senator DeMint.