Wow.  The “peace and love” crowd is approaching this election with all of the compassion of a Great White amid a herd of seals.  They had North Carolina within their grasp in 2008, but it slipped away in 2010 and 2012.  They’ve hauled out the big guns for a scorched earth, Sherman-esque strategy to take The Tar Heel State back by any means necessary.

That pack of libtards at Buzzfeed is the but the latest to sucker-punch our governor. The latest offense?  Hanging out with a “hate group” while people were getting killed by Hurricane Matthew.

First, here is the big boss at the North Carolina Young Democrats (and an NCAE official): 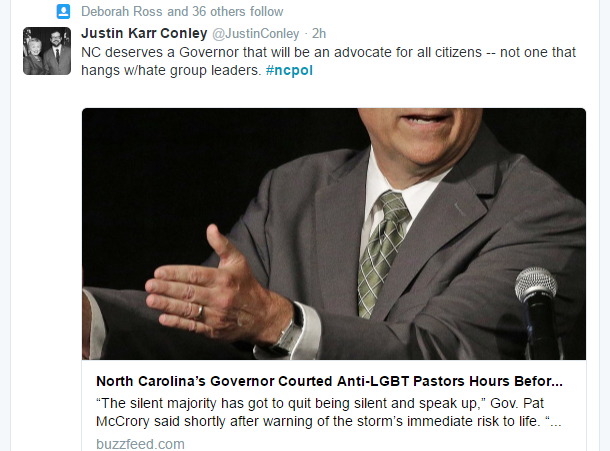 What “hate group leaders” is this dumbass babbling about? McCrory was speaking to a statewide meeting of pastors and activists affiliated with The Family Research Council.   The Buzzfeed piece makes a point of noting FRC has been declared a “hate group” by The Southern Poverty Law Center — a far left kook fringe group that has assigned itself the role of society’s referee on who is racist, and who is not.  (They’ve pegged Rush as a hate leader too.)

The Family Research Council is a Christian-oriented political action organization not too different from The Christian Coalition and Moral Majority.  Its leader, Tony Perkins, is a close friend and confidante of Charlotte pastor Mark Harris — a veteran of recent runs for US Senate and US House.

In 2013, a lunatic charged into the FRC’s Washington offices firing a gun at anything that moved.  (He ended up killing a security guard.)  The suspect — who ended up getting 26 years in prison — was an Obama fan who said he did the deed because the Southern Poverty Law Center said the FRC was a “hate group”‘ for opposing gay marriage.

Lefties won’t blame bombings and beheadings on radical Islam. But they damn sure won’t hesitate to label Christians defending traditional marriage as “haters” akin to the Nazis or KKK.

Here’s more on the McCrory event from the dingleberry at Buzzfeed:

As Hurricane Matthew barreled toward the North Carolina coast on Friday, Gov. Pat McCrory spent the night on stage addressing far-right pastors, asking them to support the state’s controversial anti-LGBT law and back his reelection.

“You have five weeks, or four-and-a-half weeks, to speak out in North Carolina,” McCrory implored the group on Friday, according to a recording of the eventobtained by BuzzFeed News. McCrory lamented the backlash to the law, which restricts restroom access for transgender people, and denounced his Democratic challenger, who opposes the law.

“I don’t agree with the concept of redefining gender,” he said. “Let your congregations and your businesses, and everyone else know. Are there people behind this issue or not? We’re going to find out.” 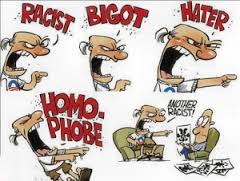 Just a couple hours before, in a press release, McCrory warned the storm posed an “immediate” threat to human life and President Obama had just signed a disaster declaration for 66 of the state’s 100 counties. By Monday, 10 people in North Carolina were counted dead.

In a rambling defense of the law at Friday’s event, McCrory said the measure’s supporters were being “purged,” that he and his wife have been socially shunned, and that university presidents were responsible for relocating championship sports games in a display of hypocrisy.

McCrory added he has received death threats — though he did not elaborate on them — and corporate executives were distancing themselves from his reelection campaign over his support for the unpopular law.

“Please, please, help America and stand with this man and his team and get others to stand with him and vote for him,” pleaded moderator Tony Perkins, president of the Family Research Council, which sponsored the event in Raleigh. The Southern Poverty Law Center has classified Perkins’s organization as a hate group.

“The immediate concern from Hurricane Matthew is life threatening rain accumulation,” said McCrory in a statement at 5:51 pm Friday. He announced FEMA had accepted his request to declare a disaster most counties. “Our resources are in place and we are ready to respond,” his statement continued. “Be prepared, be careful and be safe.”

I’ve see all kinds of drive by media footage and copy showing McCrory making statements on the storm.  To suggest he blew off the storm to go hang with a “hate group” — like Obama golfing during various military ops — is appalling.  But look who we’re talking about here.  MORE:

But nine minutes later, at 6pm, the Family Research Council’s event began with McCrory as the headline speaker.

“The silent majority has got to quit being silent and speak up,” he said. “You have four weeks to do it…The surveys are showing you are the minority.”

“It’s almost like the George Orwell book 1984, where if you disagree with Big Brother, or you go against the thought police, if you remember that book, you will be purged and you will disappear,” he said. “My wife, for example, in Charlotte, she primarily stays in Charlotte. She’s been disinvited to charity events, and basically, they call her up and they say, ‘you know, you better not come. You better not come.’”

Likewise, McCrory has been rejected. “The head of Bank of America now, or some other companies that just this week told me they cannot support me, although you’ve been an outstanding governor, we still cannot support you because [the LGBT advocacy group Human Rights Campaign] will attack us. And I’ve had at least five this week tell me that.”

[…]“Most headlines are saying McCrory is either tied or losing because of HB2,” he said. “And I suppose if I lost, the national media will say governor, in fact the New York Times and the Washington Post were saying today, that the only reason McCrory’s in a tough race is because of HB2. I happen to disagree with that, I actually was catching grief through my whole tenure.”

He said that companies have been hypocritical by withdrawing business from the state while conducting transactions in countries hostile to human rights. “But they do have the media on their side, and they have a lot of voters on their side now too because the voters don’t understand the issue,” he said.

McCrory had similar sentiments for the college sports boards withdrawing their championship games in protest of the law.

“When you hear about the NCAA canceling things,” he said, “there is no NCAA really, the people who run the NCAA are the presidents of the universities. So the headlines don’t say presidents of the universities boycott North Carolina, it says the NCAA or the ACC. These are the presidents of our schools… So they made a decision to boycott the 9th largest state in a private meeting, with no public notice and yet the people they have are not-exempt, tax-pay supported presidents. And they see nothing wrong with it. It’s amazing, the hypocrisy.”

“My wife and I ,” he went on, “we’re being shunned for a political disagreement, a value disagreement…And it’s personal, it’s death threats. Last week I was verbally assaulted by a 21-year-old drunk student. And she was arrested. And those are tough. Everyone says, ‘Gosh you must have thick skin.’ I don’t have thick skin, I just hide it…It gets to me, I just hide it until I go home and sit in a room or walk a dog and I go, ‘Wow, this is depressing.’ So I need to let you know it’s not easy.”