Liberals LOVE to hide behind kids.  They use them as props in their photo ops / demonstrations / crying jags all the time.  Obama had one standing by as he signed Obamacare into law. 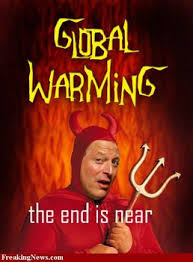 They love to tell us how they love kids more than the rest of us.  It’s funny, though.  They spend a lot more time than we do brain-washing kids and stealing their childhood in order to score political points.

Well, we had about six or so feminazis standing outside the governor’s mansion on Monday waving signs and hollering.  Gov. Pat’s team thought it would be funny to take them some cookies. If they would have left it alone, that pack of screech owls out on the sidewalk would have been an after-thought in a Google search. But no — Pat steps out with his cookies, and we get a whole work week worth of coverage.

The most appalling angle to this story is a 12 year-old protest participant.  Most people would be appalled at a parent who would camp out all day and night on the sidewalk holding signs with their kid.  (Where is social services when you need them?)  But NO,. the stupid mainstream media finds the whole thing charming:

Twelve-year-old Madison Kimrey got hooked on protesting about a month and a half ago, when she visited Florida during a demonstration outside a children’s museum.

Madison, a Burlington resident, continued that activism this summer with Planned Parenthood and Occupy Raleigh back in her home state. And for her trouble, what has she gotten? A piece of cake.

Tuesday evening, several hours after Gov. Pat McCrory gave cookies to women protesting the state’s new abortion law, Madison and her mother, Mary Kimrey, came to the Governor’s Mansion to protest with several Occupy Raleigh members. Around 10:30 p.m., a staff member came out of the mansion to shut the doors.

“We were like, ‘Hey, those cookies were really good, could we have some brownies,’ joking and everything” at the staff member, Madison said. (The afternoon protesters had returned the cookies uneaten.) 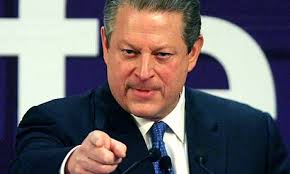 She said the person laughed, went back inside and then came out with three slices of cake in to-go containers.

“I was like, ‘Thank you very much, but it would be nice if we could have some rights with that,’ ” Madison said. “I was like, ‘Why? You do realize this is just giving us more ammo against Pat.’ I would rather sit down with Pat while we’re eating cookies.”[…]

I swear.  Her parents need to be dragged in front of Child Services. If you think that’s bad, wait until you hear the story of Hallie Turner. I first heard about her this weekend when that font of intellectual depth Rufus Edmisten fawned over her at the end of NC Spin.  What had ol’ Rufus so excited about this 13 year old girl?  She’s suing the State of North Carolina.  In other words, YOU and ME:

A 13-year-old North Carolina girl, who is suing the state over its greenhouse gas emissions, argued in court Friday that regulators don’t have the right to dismiss a petition she made asking the state to limit carbon pollution.

Hallie Turner, a Raleigh middle school student, submitted a petition in December 2014 calling for the North Carolina Environmental Management Commission (EMC) to cut the state’s emissions by 4 percent each year until 2050. 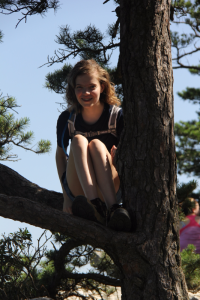 This isn’t Turner’s first foray into public climate activism. She has been writing blog posts in support of cutting emissions and urging action against climate change since the age of 10.

The lawsuit has its roots in a petition Turner filed in December 2014, asking the commission for rule changes limiting carbon emissions so that they reach a peak in 2015. A local Raleigh attorney, Gayle Goldsmith Tuch, and Our Children’s Trust, an Oregon-based nonprofit organization that focuses on stopping climate change, provided Turner with assistance and pro-bono legal services.

The commission rejected her petition, saying it didn’t have the power to make the changes. The lawsuit challenges that argument. The judge in the case said he would make his next decision in the case by Thanksgiving.

In an interview with Al Jazeera, Turner said she wants North Carolina and the world to do more to limit carbon emissions. “We need to act now,” she said. “The EMC took away my right to make my voice heard. If the judge decides to support our petition, it’ll be nice to know that our voice is being heard.”

The commission did not respond to a request for comment. The North Carolina Department of Environmental Quality (NCDEQ), however, did offer a response.

“The state environmental department is not a party to this litigation but it’s important to point out that North Carolina is a national leader in cleaning up its power sector and improving air quality,” said Mike Rusher, a spokesman for the NCDEQ, saying the state had cut carbon emissions “20 percent since 2005 without any federal intervention.”

Frank Holleman, a senior attorney with the Southern Environmental Law Center who has fought lawsuits over pollution from coal plants in North Carolina, said today’s hearing is just the first step. “If she wins this fight, then she starts over again with the EMC and will have the task of convincing the members of that commission to take her petition seriously and to work to see what they can do to fight climate change,” he said. 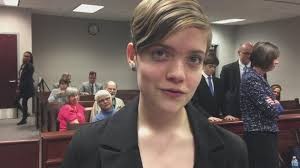 “In terms of obstacles, there are very powerful moneyed interests that will fight her — oil and gas and coal industries and their lobbyists and lawyers,” he added.

Turner, an eighth-grader who enjoys social studies, said she’s not sure what kind of career she wants, but knows that the environment will remain important to her.

“I’m going to keep fighting for this issue for as long as it’s relevant, until we don’t have to worry about this,” she said.

Oooof.   To make this even more painful, listen to little Hallie in her own words talking about her inspiration:

I became passionate about climate justice at a pretty young age. I was in fourth grade when I was first inspired to take action against the climate crisis. At my local library I picked up a book called “An Inconvenient Truth: The Crisis of Global Warming” by Al Gore. I had heard of the climate crisis, but I didn’t understand it. I was just a bored kid looking for something to read over the summer. I didn’t know at the time how Gore’s book (and, by extension, the issue) would bring me to discover an organization called iMatter, and the campaign iMatterNow.

Climate justice.  You got it?  CLIMATE JUSTICE.  Read on:

[…] I didn’t understand most of the issue as a fourth grader. I was pretty naïve, and I didn’t know who Al Gore was. But I was tremendously inspired by his words, and I did know that I wanted to get involved. Gradually, I asked myself more and more questions. How was it that I had never heard of this crisis before? Why were people still denying science? How could someone see the facts in “An Inconvenient Truth” and all the other research and still refuse to act? Why did some people not get that things needed to change? Most importantly, I wanted to know what I could do to get involved.