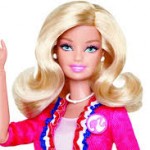 Big Govt Barbie has been prancing around DC proclaiming herself the champion of millenial women.  Well, she got a surprising earful from some millenial women who were pretty miffed at her double-cross on the recent late-term abortion ban legislation:

[…] After about a dozen or so students met with Congressman Tim Ryan (D-OH) yesterday to discuss abortion, they headed down the hall to Rep. Ellmers’ office to see if she was around. After all, they were on Capitol Hill today to talk about millennials and abortion and Rep. Ellmers is no stranger to those topics.

At her door, we were eventually greeted by a representative who directed us to a Legislative Assistant, Kristi Thompson.  She instructed us out into the hallway probably because our students would have crowded the office.  Our students patiently took turns sharing their concerns about the Pain Capable bill being delayed in January. It was supposed to be up for a vote on Jan 22, the anniversary of Roe v. Wade and the day of the March for Life but Rep. Ellmers paved the way for the bill to be pulled because of her, and others’, vocal displeasure. She specifically mentioned millennials that would be turned off from the GOP if the bill was brought up for a vote. In reality, millennials support banning abortions after 20 weeks by 52%.

Kristi listened intently, thanking us for our comments.  After about 10 minutes of discussion we began to wrap things up when the Congresswoman herself approached her office.  It seemed she had just come in from outside since she was wearing her coat and carrying a coffee cup.  Congresswoman Ellmers appeared happy to see us and invited us to share our concerns again with her personally. However, when we tried to videotape our conversation, Kristi insisted we not use video, only photos.

No video? I can’t imagine why.  She comes off *SO WELL* when she’s recorded.   MORE:

Throughout our conversation she acknowledged our concerns with agreeable head nods.  She assured the students that she was “pro-life just like us” and that if the Pain Capable bill came up to a vote with language like last year’s bill, she would vote yes.  [She actually did vote yes on an identical bill in 2013]

Lori Kostka, a student at George Mason University, questioned Rep. Ellmers on her open letterpublished last Friday – she called pro-life groups “childish and abhorrent” – asking why she did not mention the overwhelming number of millennials who not only marched for life two weeks ago or the 60+ young people who visited her office the same day (she wasn’t there but the group met with her staff).

Rep. Ellmers seemed troubled by our mention of her previous millennials comment by letting out an audible sigh and claiming that her comments about millennials not caring about social issues in the past had been “taken out of context” and that she does realize that young people care about issues like abortion.  She added that she had meant she hadn’t seen millennials be “active” in their views on social issues before and that young people usually do not often share their views with others.  We assured her that students are, in fact, active on their campuses regularly and they receive support from their peers on this issue.

Hmmm.  Let’s see how misquoted she was or how ”out of context” she was taken:

[…] Republican lawmakers are raising concerns that the party will alienate young voters and women by voting for an antiabortion bill coming to the House floor next week, on the 42nd anniversary of the Roe v. WadeSupreme Court decision.

In a closed-door open-mic session of House Republicans, Rep. Renee Ellmers spoke out against bringing up the Pain Capable Unborn Child Protection Act, which would ban abortion after 20 weeks, telling the conference that she believes the bill will cost the party support among millennials, according to several sources in the room.

“I have urged leadership to reconsider bringing it up next week.… We got into trouble last year, and I think we need to be careful again; we need to be smart about how we’re moving forward,” Ellmers said in an interview. “The first vote we take, or the second vote, or the fifth vote, shouldn’t be on an issue where we know that millennials—social issues just aren’t as important [to them].” […]

Let’s see. She tried this ”misquoted” angle back during the brouhaha over her ”talk down to women” comments.  Then, the woman who broke THAT story released her audio recording and transcript.

Most people — when they find themselves in a hole — stop digging. This dingbat keeps digging.  Perhaps she sees it as a cheap way to visit China.