It’s a phenomenon we see every four years.  The drive by media, in cooperation with their leftist allies, starts painting the portrait of the GOP presidential ticket as being the real-life inspiration for those “Dumb and Dumber” movies.  Never mind the actual credentials of the GOP candidates. The Republicans could nominate Stephen Hawking and the drivebys would still find some way to question his intellect.

George W. Bush had degrees from Harvard AND Yale — and yet he was a “dummy.”

Barack Obama spoke passionately about visiting FIFTY-SEVEN American states and, while in Hawaii, about how great things are “here in Asia.”  The drivebys tell us HE is brilliant.

Hillary Clinton’s State Department emails detailed for us the lengths her girl Huma had to go through to get Hillary to hang up the fax machine.  We also learned that there was a process involving TEN different people just to get Ma Clinton some coffee.  *AND she is, um, brilliant too.*

Disagreeing with someone does not make them an idiot.  They have a different perspective than you do.  (Being elevated to secretary of state, and not being able to comprehend hanging up the fax machine is another story altogether.)

Think about this:  a person, with an MBA from the University of Pennylvania’s Wharton School of Business — (which is NO JOKE, nothing to sneeze at) — who takes an initial one million dollar investment and turns it into BILLIONS.    Sounds like a person you would want to emulate or to even be pals with.  Sounds like a top-notch, top-caliber person, huh?  Well, THAT is your GOP nominee for president.  Donald J. Trump.

So, what does T

he Washington Post come up with as a headline today as the GOP convention opens?:  Donald Trump doesn’t read much. Being president probably wouldn’t change that.

That will evolve into *”Ooh, he CAN’T read.  He needs pictures.  And someone to help him sound the words out.”*   That is SUCH an *important* question that every voter is dying to know.  Screw taxes and regulations.  WHAT, oh WHAT, is on The Donald’s nightstand?

Being here in Pinehurst, I’ve had the opportunity to interact with folks who have CEO’ed major corporations and have — on occasion — rubbed elbows with The Donald in social and business situations.  Many of these folks — who happen to now be retired — tell me that NOW is the first time since college that they had time to actually sit down and read 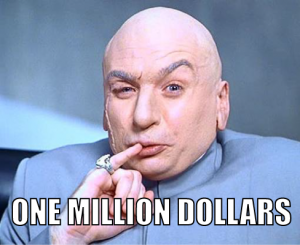 a book.  As CEO of a major corporation, your day is wall-to-wall-to-wall meetings. You PAY people to do the reading and research and to advise you on the best next move.

In politics, there is a phenomenon known as “the vanity wall.”  It typically features a bookshelf packed with some high-brow sounding titles and some photos of the office occupant with various and sundry “famous” people.  I’ll give ten-to-one odds that most of these people have not read ANY of those books on that bookshelf cover-to-cover.

I think a track record is more telling in selecting a leader.  We’re down to two likely choices for our next president.  A guy whose blood, sweat and tears have turned ONE MILLION into BILLIONS and a woman who has lied, cheated, and stolen her way to the top — causing a little death and violence here and there along the way.

It’s not a tough choice for me.

7 thoughts on “Drivebys cranking up the ‘idiot’ narrative”