CNN and The Charlotte Observer are appalled. Just appalled: 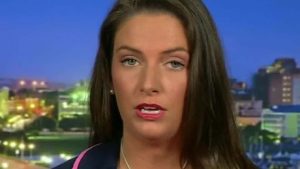 A former Miss North Carolina who competed in the 2006 Miss USA pageant told CNN that pageant owner Donald Trump personally inspected each woman prior to the contest, to the point where it was “the dirtiest I felt in my entire life.”

Former pageant queen Samantha Holvey, a native of the Harnett County community of Buies Creek, made the accusation in a CNN story that was published Thursday.

“He would step in front of each girl and look you over from head to toe like we were just meat, we were just sexual objects, that we were not people,” Holvey is quoted as saying.[…] 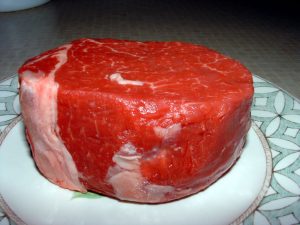 It’s kind of like an aspiring quarterback moaning about how mean and violent the other guysare after playing his first game.  MORE:

“You know when a gross guy at the bar is checking you out? It’s that feeling.”

[…] A handful of other Miss USA contestants have been quoted this week saying similar things. Trump and his supporters have noted the accusations appear to be part of a barrage of negative publicity strategically coordinated by his opponents to cripple his campaign in the final weeks before the election.

She told the news site that the contestants attended private parties where they mingled with “old, rich drunk guys ogling all over us.” 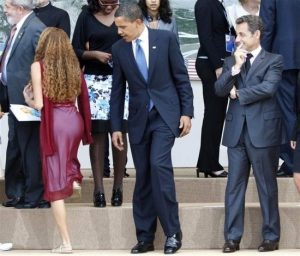 Holvey said the final straw was when Trump and his wife, Melania, showed up backstage.

“He was literally walking around just looking at the girls and then he and Melania walked in,” Holvey is quoted as saying.[…]

Oh, so he’s there with his wife — a former fashion model. (And he, um, DOES OWN the pageant.)  If you talk with Melania, I am sure she’ll tell you that, in her former line of work, it was pretty typical to have people “inspecting” you backstage.  You also had hundreds “inspecting” you during your runway walk.

If you are horrified at being visually “inspected,” the beauty pageant circuit is probably not for you.

People say a lot of things in public.  Often, you get down to their true feelings by checking their social media.  Here’s ol’ “Sam”, now living in SC, NOT being so horrified at people being treated like meat:

*But, but, but WHAT about his brain, his intelligence, his football skills ????*

Oh, and here she is proudly boasting about being named “Miss Photogenic” — an honor based solely on one’s looks, one’s exterior appearance. 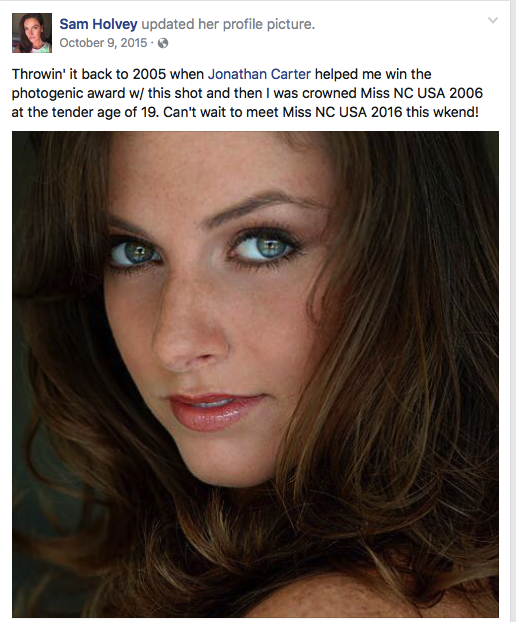 4 thoughts on “Drive by SHOCKER: Beauty pageant gals get OGLED !”