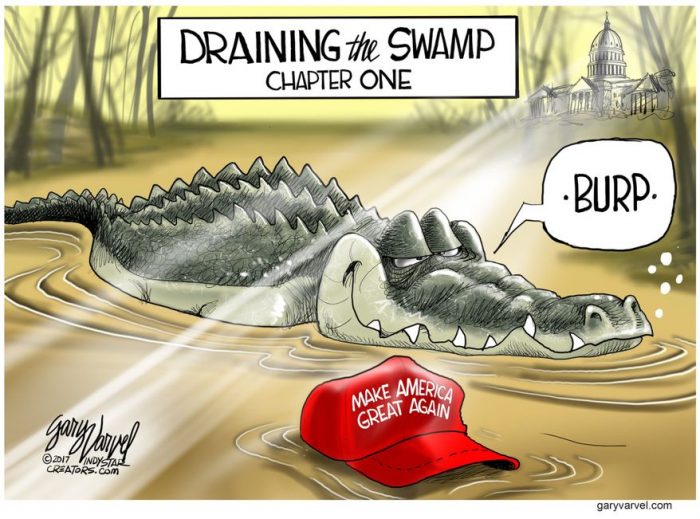 With President Trump’s endorsement of the man whose biggest dream upon arriving in DC was chairing the National Republican Senatorial Committee,  we can officially attach a ‘jk’  (just kidding) emoji to Trump’s whole ‘Drain The Swamp meme.

Trump came out with an official endorsement of Thom Tillis’s reelection bid today.  What’s funny  is — I can’t find any record of Tillis EVER publicly endorsing Trump.  (Tillis sure made  a big deal out of his endorsement of Marco Rubio back in 2016.)

Believe it or not, you can still respect and support politicians when they occasionally do something you don’t like.  Senator Helms frustrated me with some of the things he supported during his time as ranking member or chairman of the Agriculture Committee and Foreign Relations Committee.

In 1990, I was in the auditorium when former President Reagan formally endorsed gun control.   It made me sick to my stomach.  Granted he had been through an experience that colored his thinking on the matter.  But that didn’t make me abandon my respect for the man.

Thom Tillis is beyond saving or even respect.  He lied to us throughout the 2014 campaign, and barely survived.  He has thumbed his nose at his voters since arriving in DC.  There is NOTHING to justify keeping him in the Senate for six more years.

The bottom line is this: Don’t put politicians on pedestals.  They are just like the rest of us.  (Sometimes WORSE. i.e., Tillis.)  They make mistakes and do things we wish they wouldn’t.  It’s our job to guide them back onto the straight and narrow.

Since the NCGOP convention, it ought to be clear that the national Republican Party is conducting a hostile takeover of North Carolina.  They’ve picked our state party chairman, and they’re preparing to pick another US senator.  (Everyone remember Watergate Hotel resident Elizabeth Dole?)

Oh, and the op-ed that Tillis wrote in 2017 claiming Trump had NO MANDATE sure was a knee-slapper worthy of a presidential endorsement, eh?

Another “funny” is how loaded with falsehoods the Trump endorsement of Tillis is.  It’s as though the president is completely unfamiliar with our very own walking talking cash machine, aka the junior senator from North Carolina.

“Strong on the border and fights hard against illegals immigration.”   WTH?  Seriously?    Trump must have missed this interview Tillis did with Tucker Carlson where Tillis emphatically denied that we even need a wall AT ALL.   The president must have also missed Tillis holding up the approval of one of Trump’s Homeland Security nominees who was to handle immigration.  Let’s not forget Tillis’s efforts to prop up the Obama-era DACA program.

This endorsement coming now  is soooooooo  RNC.  Those boneheads would rather blow millions in propping up a horrible, unpopular nominee than to let the people decide on a possibly better candidate.  The deeper DC sinks its claws into North Carolina politics, the more at-risk they put the NCGOP ticket in November.  You can take that to the bank. 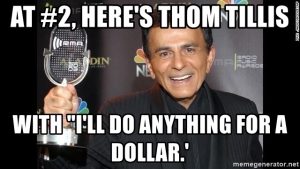 Nobody — outside of the DSCC — wants Thom Tillis as the GOP’s general election nominee.  Every bit of polling confirms that.

Try finding a North Carolina Republican candidate who wants Tillis campaigning with them — or even endorsing them.  Nationally, Tillis has been found to be the 2nd most unpopular Republican up for reelection in 2020.  And the RNC and White House are ready to bet the farm on him. 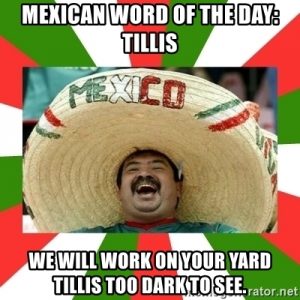 Part of this, I’m told, has to do with Garland Tucker’s op-ed in 2016 criticizing candidate Trump but admitting he would reluctantly be voting for him.  (Since that writing, Tucker has said in speech after speech after interview that Trump has been (1) a pleasant surprise and (2) the closest thing we’ve had to Ronald Reagan and Margaret Thatcher since those two were in power. )

But what about Tillis’s op-ed where he said in 2017 that neither Trump nor Republicans had a mandate — and that everyone needed to work with Democrats?

Another part is Trump worrying about his own election.  He’s worried the NCGOP will beat itself up in a primary and energize the Democrats in November.  That’s pretty weak.  But that’s DC for you.

One more piece of food for thought:  The last time Trump got in the middle of a NCGOP primary early?  It was 2016 and involved incumbent Reps. George Holding and Renee Ellmers.   Trump proudly endorsed Ellmers.  Holding took her out anyway.  Guess who Holding’s campaign consultant was then?  Carter Wrenn, the same guy running Garland Tucker’s 2020 campaign.

25 thoughts on “‘Draining the swamp’? Officially, now a JOKE.”