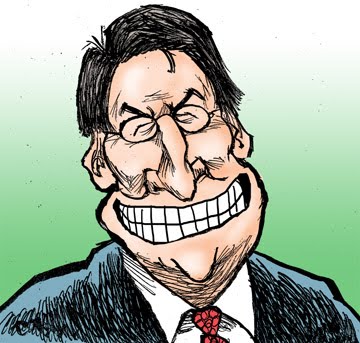 “Give me something to believe in …”

We’re already getting a preview of November.  The Democrats are already talking about “killing” Mitt Romney and “eviscerating”  Pat McCrory.

The GOP response?  Mitt Romney trashes the idea of attacking Obama about his crazy preacher friend Jeremiah Wright.  The RNC “fires” a consultant tied to a group that got “asked” to look into an anti-Wright ad campaign.  McCrory’s campaign cries and whines about how mean the Democrats are for using the “E” word.

I hate to break it to you, guys.  Big-time politics — like football — is a full-contact sport.  Sometimes, concussions and broken bones have to be handed out on the way to accomplishing your goal: winning.

The Republican establishment has dealt us a weak hand — Romney and McCrory, two guys with not much of a conservative record.   It appears we’re running with the “competence, not ideology” argument this year THAT WORKED SO WELL FOR MIKE DUKAKIS IN 1988.

Romney tells us Barry Obama is “in over his head.”  Yes, that’s true. But he’s also a hardcore radical who — along with his comrades — is bent on turning this country into a third world socialist utopia.  Highlighting Barry’s friends, and their beliefs, is key to portraying him as the radical he is.  Obama claimed, in 2008, that he rarely paid attention to what Wright said while he attended his church for 20 years.  But how do you explain the gushing, lovey-dovey quotes about Wright in Barry-O’s book?

If you’re going to campaign as a slightly-less of a big spender than your opponent, all you’ve got left is to go for the jugular on personal issues.  If Romney is going to make that hands-off, he’s going to start looking  A LOT like John McCain circa 2008.

Pat McCrory doesn’t have much of a conservative record to run on. Charlotte rose to the top as the highest-taxed city in North Carolina during McCrory’s reign as mayor.  City spending — and the crime rate — also grew by leaps and bounds.  McCrory also fought tooth-and-nail against conservative activists seeking to repeal a sales tax hike.

The Republican Governors Association ran an ad attacking Walter Dalton as Bev’s right hand.  That’s weak.  The governor and lieutenant governor don’t run as a ticket in this state.  I’d go after Dalton for being practically invisible for four years.  I’d also go after him for his tenure as Senate Appropriations Committee chairman, where he worked hand-in-hand with Kay Hagan to bloat state government and push our state deeper into debt.

The Democrats are also running an ad talking about McCrory’s work with a law firm that lobbies, and his time on the board of a financial services company.  McCrory responds by threatening a lawsuit and calling the ad a lie.  That tactic invites the media to run “fact check” pieces that  give the hated ad extra “legs.”

A better response for McCrory is to talk about Dalton’s daughter and her dramatic rise through the lobbyist ranks while her daddy has been a state senator and lieutenant governor.   Right out of  college,  young Ms. Dalton gets scooped up by one of the top lobbying firms working the NC General Assembly.   It would be worth looking at any connection between Dalton’s votes and Ms. Dalton-Robinson’s clients.

I’m seeing too much defense being played by the two major Republican campaigns.  It appears the RNC and the powers that be in DC have accepted the leftist narrative about a GOP “war on women.” Renee Ellmers, Michelle Bachmann and some of the other gals in the House have been hauled out to suggest that ‘Yes, Republicans like girls, too.’

Just like in sports, you’re in big trouble if you’re spending more time on defense than your opponent is.

Hands down — the GOP success in 2010 came as  result of the Tea Party’s work.  A platform of cutting government and cutting taxes swept a lot of new Republican faces into power.  That year — it WAS about ideology.

People are BEGGING for some courageous leaders to step in and cut back the government leviathan and restore some freedom.  Talk about how the taxing and spending and regulations are strangling the economy and causing layoffs and high gas prices.  Explain to people about how it’s Barry and the establishment’s fault.

The consultants and the establishment are working SO hard to blur the lines separating the two parties ideologically.  2010 proved that demonstrating a radical difference between the two parties is a WINNING move for the GOP.