US Rep. Virginia Foxx (R-5) is making use of the cromnibus talking points disseminated by Boehner & co.:

“While an omnibus spending bill is not ideal, it allows changes to policy that a continuing resolution simply cannot. For example, this legislation includes provisions to help meet the goal of ending the disability claims backlog at the Department of Veterans Affairs by the end of 2015. It also prevents the Army Corps of Engineers from regulating farm ponds and irrigation ditches under the Clean Water Act.

“Additionally this bill will allow Congress to focus immediately on addressing the pressing issues facing our nation, including stopping President Obama from implementing his executive amnesty, when we return in January with Republican majorities in the House and Senate.

“The appropriations process is an important tool for holding the vast federal bureaucracy accountable to Congress, and it’s my sincere hope that next year the Senate will return to regular order, including hearings, oversight and the elimination of wasteful spending on ineffective programs, as the House has been doing for the past four years.”

H.R. 83, Consolidated and Further Continuing Appropriations Act, 2015, passed the House of Representatives by a vote of 219 to 206. The bill abides by the 2013 bipartisan budget agreement, and overall discretionary spending has been reduced by $165 billion since FY 2010 as a result.

Oh.  *THAT makes it soooooo much better.*  She’s clearly on the same page with Renee Ellmers AND Richard Hudson.  They all want 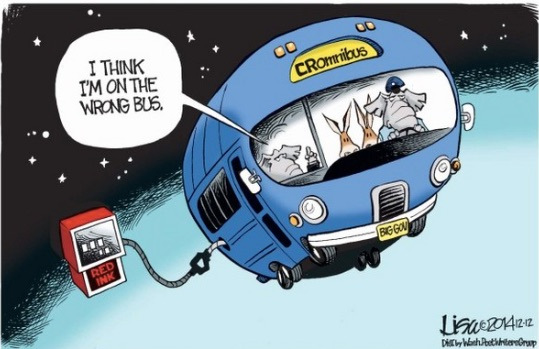 I still haven’t heard a good reason for allowing Dingy Harry and Nancy Pelosi to influence federal spending for another whole year.

Even Renee Ellmers admits that Barry Obama can take the money from a continuing resolution and do what he wants with it.  So, HOW exactly did Mrs. Foxx & co. STOP AMNESTY?

It appears George Holding (R-13) says he had two really “bad choices” facing him this week:

“Due to the standoff between the Democratic Senate and the Republican House, two bad choices landed on Congress’ doorstep today.

“Bad choice number one was to vote against the appropriations resolution – which would lead straight to a government shutdown. We’ve already seen this doesn’t solve problems or bring about spending cuts.

“Bad choice number two was to vote for the appropriations resolution. To be sure, there are some worthwhile provisions in the resolution – for instance, it provides funds to fight ISIS.

“Those were the choices, and it was a take it or leave it proposition. We couldn’t amend the bill. We either had to vote for a bad bill or shut down the government. Period.

“In the end, I reluctantly voted for the bill as the lesser of two evils. But make no mistake: this budget resolution encapsulated what’s wrong with Washington politics. There wasn’t a good choice. Just two bad choices.

“Next year, when there is a Republican majority in the Senate, this kind of broken politics must end. Republicans need to offer a real budget rather than proposing another last-minute resolution.”

Yep.  *That 2013 government shutdown was soooooo traumatic and damaging to the GOP that they won 40-plus additional seats in the House and nine new seats in the Senate.*

15 thoughts on “#CRomnibus: Foxx cheers it; Holding apologizes for himself”