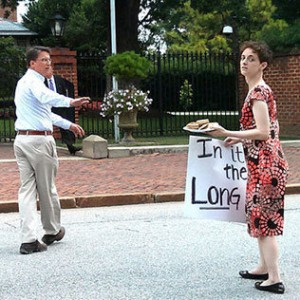 Well, we had about six or so feminazis standing outside the governor’s mansion on Monday waving signs and hollering.  Gov. Pat’s team thought it would be funny to take them some cookies. If they would have left it alone, that pack of screech owls out on the sidewalk would have been an after-thought in a Google search. But no — Pat steps out with his cookies, and we get a whole work week worth of coverage.

The most appalling angle to this story is a 12 year-old protest participant.  Most people would be appalled at a parent who would camp out all day and night on the sidewalk holding signs with their kid.  (Where is social services when you need them?)  But NO,. the stupid mainstream media finds the whole thing charming:

Twelve-year-old Madison Kimrey got hooked on protesting about a month and a half ago, when she visited Florida during a demonstration outside a children’s museum.

Madison, a Burlington resident, continued that activism this summer with Planned Parenthood and Occupy Raleigh back in her home state. And for her trouble, what has she gotten? A piece of cake.

Tuesday evening, several hours after Gov. Pat McCrory gave cookies to women protesting the state’s new abortion law, Madison and her mother, Mary Kimrey, came to the Governor’s Mansion to protest with several Occupy Raleigh members. Around 10:30 p.m., a staff member came out of the mansion to shut the doors.

“We were like, ‘Hey, those cookies were really good, could we have some brownies,’ joking and everything” at the staff member, Madison said. (The afternoon protesters had returned the cookies uneaten.)

She said the person laughed, went back inside and then came out with three slices of cake in to-go containers.

“I was like, ‘Thank you very much, but it would be nice if we could have some rights with that,’ ” Madison said. “I was like, ‘Why? You do realize this is just giving us more ammo against Pat.’ I would rather sit down with Pat while we’re eating cookies.”

The poor child.   She’s obviously been failed by her school teachers.  Pat McCrory doesn’t give out rights.  THOSE are in a little ol’ piece of paper called The Constitution.

This kid is going to need SO much therapy when she grows up.  (I wonder if ObamaCare will cover it?)  MORE:

The cookies McCrory gave Planned Parenthood supporters earlier on Tuesday had already started a swarm of online comparisons between the governor and Marie Antoinette, she said. The cake didn’t help.

The governor was not involved at all in handing the cake out, and it was not connected to the cookies, McCrory’s communications director, Kim Genardo, said Wednesday afternoon.

Abortion-rights activists who got the cookies Tuesday from McCrory while protesting his signing of Senate Bill 353 are still baffled by his gesture, said Paige Johnson, Planned Parenthood of Central N.C.’s vice president of public affairs.

Yeah. I bet it was baffling.   I’m sure those screech owls don’t get too many gifts from men.  MORE:

“To receive no word from him, and then to just give the plate of cookies, I think it’s just an audacity that no one expected,” she said. There was a “digital title wave” of comments on social media condemning the governor’s gift after the organization posted pictures on Facebook, she said.

“It really took us a while to understand the magnitude of what had happened.”

But Johnson said she isn’t sure how Planned Parenthood will respond to the cookie incident – in previous protests they’ve commented on GOP actions by riding around on motorcycles and dressing in outfits styled after the 1960s-set TV show “Mad Men.”

“We’ll do something,” she said.

Oh, goody.  I am SURE WRAL will have a camera crew on stand-by.