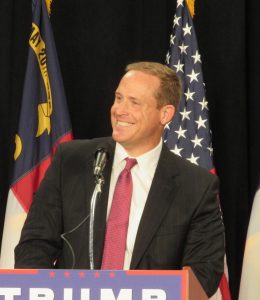 The new guy in town sure is getting some attention in conservative circles.  Conservative Review has finally decided to update its conservative rankings of Members of Congress.   Their analysis — as of April 18 — has congressman Ted Budd rockin’ a perfect score of 100 percent.  (Budd is one of just 17 House members CR awarded a perfect score to.)

Mark Meadows, the previous king of the hill, comes in second at 93 percent.  Budd and Meadows are the only As handed out this time to North Carolinians by CR.

In the B category, we have Mark Walker with an 81 rating, and George Holding with an 80.   Walter Jones gets a gentleman’s C at 76.

Richard Hudson is barely passing with a 64 (D).  David Rouzer is also in D country with a grade of 63, as is Virginia Foxx at 60.

Our two failures (Fs) in the House are  Patrick McHenry (53%) and Robert Pittenger (46%).  Pittenger officially replaces Renee Ellmers as the most liberal Republican House member from North Carolina.  (I HEAR he has a pretty BIG NAME primary challenger lurking out there.  More later.)

Senators John Kennedy (R-LA) and Mike Lee (R-UT) are the only two senators to receive a perfect score of 100 percent.  (Those were two of just six senators to receive A ratings, though.)   Only 19 senators got passing grades.  Burr and Tillis rank, respectively, 37th and 38th out of the 52 member GOP caucus in terms of conservatism.

5 thoughts on “Conservative Review: Budd overtakes Meadows as most conservative NCGOPer in DC”