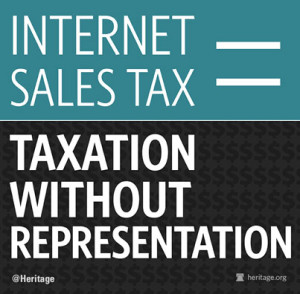 The Senate has passed something called “The Marketplace Fairness Act.” Sounds nice, doesn’t it?  Who doesn’t like making stuff FAIR?

Our Democrat senator, Ms. Hagan, and our Republican senator, Mr. Burr, have both voted in favor of this legislation which is now on its way to the House.  Over in the House,  Renee Ellmers is one of the leading sponsors of this big government trojan horse.

Proponents say that this legislation is needed because Internet businesses are getting away with not collecting sales taxes, while brick-and-mortar stores are having to do so — thereby creating the “unfairness” the bill is aimed at correcting.   The problem with that line of thinking is that recent research shows e-businesses are not exactly damaging brick-and-mortar businesses:

Some 300 years ago, Russian monarch Peter the Great had a problem. He wanted to modernize his country and that meant getting men to ditch their beards—a backward and unclean symbol in his mind. So he did what many leaders do when they want their citizens to change their ways: He instituted a tax.

Taxes are all about changing behavior, and the proposed Senate bill to enforce online-sales taxes is no different. Peter the Great’s tax was intended to encourage shaving. The Senate effort operates on a similar principle: It seeks to encourage more consumers to shop at brick-and-mortar stores instead of online retailers. The beard tax ultimately failed to change behavior. And it’s not clear that the online-sales tax will achieve its behavioral goal either.

The online-sales tax effort is not about choosing one industry over the other, its proponents argue. In fact, it seeks to do the opposite: eliminate what some say is an unfair advantage given to online retailers, who have not had to collect state sales taxes for online purchases. It’s not about giving physical retailers more customers, but rather about correcting for an unfair imbalance. That may be true, but the movement is still about changing how consumers behave.

“Thousands of local businesses are forced to do business at a competitive disadvantage because they have to collect sales and use taxes and remote sellers do not, which in some states can mean a 5 to 10 percent price advantage,” one of the cosponsors of the bill, Sen. Michael Enzi, R-Wyo., said in a March floor statement. Eliminate that price advantage and all those local businesses might see more customers.

Charging state sales taxes on Internet purchases will no doubt narrow the price gap between online and brick-and-mortar retailers, but it won’t necessarily eliminate it. Online sellers such as Amazon have a serious advantage: lower overhead costs. They can set up fewer, bigger buildings in places where land is cheap, they don’t need big parking lots for customers’ cars, and they don’t need as many customer-service employees. In fact, retailers even compete with their own websites for sales. And the price gap persists even in states that have already passed laws forcing online retailers to collect sales taxes. At least one study has shown that Amazon maintains a price advantage over some big-box retailers even in states where it collects the state sales tax; enforcing state taxes won’t eliminate the online advantage.

Recent research also suggests that the very behavior retailers hope the proposal will curb may be a myth. The retail lobby insists that imposing sales taxes online will put an end to “showrooming,” a practice in which consumers use physical stores to browse and online stores to purchase. But a January report from PricewaterhouseCoopers suggests that showrooming not only may not exist, but that consumers in fact seem to act in the opposite way. They found that 23 percent of online consumers—in a survey of more than 10,000—researched consumer electronics online and then bought products in-store, while only 2 percent did the opposite. Shoppers were attracted by the ability to get products immediately and to see and try them in the store, the report’s authors write.

Ah, here we go with those pesky facts again.  Over at RealClear Markets, they are suggesting that the impetus behind this bill is to clear the field for large retailers like Amazon:

Without question, Amazon is the king of online retail. Amazon sold more than 26.5 million items in 2012, and on their busiest day (Cyber Monday), they sold roughly 306 items per second. Amazon Prime reportedly has over 10 million subscribers and the hope is that they will achieve 25 million subscribers by 2017. In 2011 and 2012, customers rated Amazon the #1 online shopping experience. In all, Amazon earned $61.09 billion in revenue last year. This dominant performance in online retail stems from Amazon’s superior services and innovation.

In other words, Amazon needs no help in shoring up its “best in show” award for online retail. For that matter, it needs no help in being recognized as one of the world’s most reputable companies. That’s why their support for the ironically named Marketplace Fairness Act to punish their competitors is terribly frustrating.

The Marketplace Fairness Act claims that state governments lose tax money when individuals purchase items online. Instead of going to their local Wal-Mart or Target and making a purchase subject to the local sales tax, customers order products on Amazon or another online retail website and then fail to file their purchase information on their tax returns. For years, Amazon opposed the enforcement of Internet sales tax collection, rightfully arguing that they should not be subject to the expensive costs of tax collection for 9,600 different taxation jurisdictions.

However, Amazon has sinceswitched its position. Amazon supported the Marketplace Fairness Act of 2011 when it was first proposed and is currently supporting the 2013 version. Now that the retailer has a massive edge in online retail, Amazon is fine with enforcing such a complex and expensive tax scheme. Nothing about the proposal has changed for Amazon specifically-they understand that this will be a very costly and burdensome proposal to obey. The difference now for Amazon is that its executives feel confident they can bear the costs while other smaller competitors cannot.

This is a smart bet for Amazon. As noted above, Amazon earned $61.09 billion in revenue last year-the company has the money to develop the processes necessary to comply with this law.But smaller companies most likely will not have that capability. Granted, the law exempts sellers with less than $1 million in sales, but what about the online seller that processes $1.5 million in sales?How can this seller compete with Amazon in a legally compliant way when it has 1/40,000th the resources that Amazon has? It’s practically impossible.

Therefore, a number of commentators observe that this bill gives Amazon a greater edge over its competitors-and that’s why the online giant is supporting it. Yet unlike the competitive edge gained by productivity and innovation, this competitive edge is one that it is arbitrarily codified into law. Amazon will capture the benefits of the regulation by enjoying less competition from smaller online sellers who will not afford the compliance costs associated with this bill.

It is hypocritical that Amazon, a pinnacle of innovation and customer service, has chosen to embrace a policy that would have harmed Amazon itself in earlier years.Some companies, including Ebay and Etsy, oppose Amazon and the Marketplace Fairness Act, noting that many of their affiliate sellers will be driven out of business.These companies realize, unlike Amazon, that the freedom to earn your way shouldn’t be based on whether or not you have the capability to collect taxes for 9,600 different tax jurisdictions. Amazon’s success story proves that the company should know better.

I like the way Heritage Action sums it all up about this bill:

The Marketplace Fairness Act is about harming online businesses and taxing Americans more.  Bottom line, this is cronyism, not “fairness.”

Life isn’t fair.  The government can’t make things fair.  Any time it tries, SOMEBODY inevitably gets screwed over.