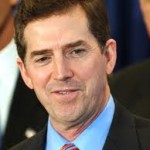 it might take THREE YEARS to seriously do anything about ObamaCare.  Jim DeMint, the former US senator from South Carolina and current head of The Heritage Foundation, has a pretty good rebuttal to all that:

[…] “Let’s always remember and warn everyone who will listen that Washington is extremely good at lowering expectations,” he said. “All the the guardians of the swamp are already whispering in the ears of Republicans in Congress and the White House telling them not keep their promises.”

Repealing Obamacare is one of the prime promises that Republicans must keep, he said.

“Every Republican in the House and Senate voted for a repeal bill in 2015 and they should send that same bill to President Trump now,” he said.

In December 2015, Congress passed a repeal bill that President Barack Obama vetoed that was largely written by Rep. Tom Price (R.-Ga.), who is now leading the Department of Health and Human Services. 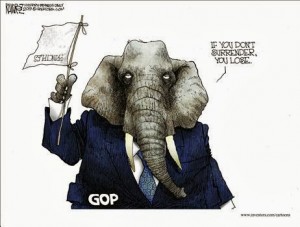 Like the 2015 bill, Congress initiated the repeal process in the last week of January through the budget process, while Democrats and many Republicans trying to slow down the repeal until a replacement was in place.

The former senator told the crowd he is not obsessed with having a replacement. “”This excuse we’re hearing that we can’t repeal Obamacare until we replace it is ludicrous.”

Before the 2010 Patient Protection and Affordable Care Act, DeMint said the American health care system was the best in the world–a system blighted by Obamacare.

“Obamacare has become a cancer on our healthcare system,” he said.

“We don’t need to replace our healthcare system, we must remove the cancer,” he said. “Once Obamacare has been removed, we will still have our doctors, nurses, hospitals, insurance companies, Medicaid and Medicare plans and veterans hospitals. No one loses their insurance, and once we get rid of Obamacare can we begin to improve our healthcare system, so it works for every American. Obamacare must be repealed now!”

*”We sent him SIX repeal bills, and he vetoed them all.”*  THAT is the whiny excuse we’ve heard from our

“honorables” over the last SEVEN years when we’ve inquired about the status of ObamaCare repeal.  Now that the GOP has Capitol Hill AND The White House, why not send Trump ONE of those six Obama vetoed? Why not?

I think the reason we’re seeing the foot-dragging is two-fold.  One is political.  DC Republicans are scared of the lying drive by media — a lot like Raleigh Republicans are.

DC Republicans don’t want to run for reelection in 2018 with the media constantly braying about all of the people allegedly tossed in the streets by ObamaCare’s repeal.

Another reason is plain Machiavellian ruthlessness and selfishness. It is so much more fun to give people stuff than it is to take it away.  Giving people stuff allows you to have control over them. It puts them in a position of having to come to YOU for help.

The longer you wait to deal with this menace to our economy and our society, the more addicted the patient becomes to this narcotic.  The harder it becomes to wean them off of it.

3 thoughts on “Calling the GOPe bluff on ObamaCare “repeal””