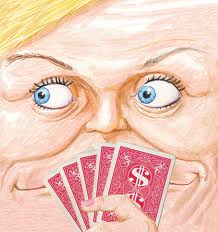 North Carolina’s beleaguered boss lady, desperately trying to stop her political career’s slide down the drain, is hauling out every scare tactic in the book.  Bev’s current screed is about how WE — hardworking folks trying to make ends meet in the middle of an economic mess created by her and her friends — need to shell out EVEN MORE money to the state:

Gov. Bev Perdue will propose restoring a three-quarter cent sales tax increase in the next budget to stop “deep and unnecessary cuts” to schools.

Perdue announced her proposal Tuesday afternoon, when she was scheduled to speak at a Greensboro elementary school.

Revenue from the increase would be dedicated to schools, Perdue said.

I thought the revenue from the “North Carolina Education Lottery” was supposed to save public education. Silly me.

“I have cut spending to eliminate waste and make government more efficient. But we cannot allow the legislature’s extreme education cuts to continue,” she said in a statement. “As the North Carolina Association of School Administrators pointed out, North Carolina has fallen to 49th in the nation in per-pupil funding. The legislature’s budget has hurt education at all levels – from pre-k all the way through higher education – and has led to higher class sizes and the loss of thousands of teacher and teaching assistant positions. And their budget forces even more teacher layoffs next year — we must act to prevent these additional cuts.”

Um, boss lady, YOU DID NOT CUT ANYTHING.  The conservative majority in the General Assembly passed a budget full of cuts over YOUR VETO (and kicking and screaming).

Let’s throw some facts into the mix.   The 2000 census found that — on average — public schools spend TWICE AS MUCH as private schools.  Private school students — on average — have higher test scores, higher grades and better college performance and graduation rates than public school students.  Public school systems in Los Angeles, New York City, Chicago and Washington, DC spend more per pupil than any other system in the nation. Arguably, those school systems can best be described as nightmares and disasters.  It’s not about HOW MUCH money you spend, it’s about HOW you spend the money you have.

Oh, by the way, The Raleigh-based Civitas Institute conducted a study last year that showed job cuts in the 2012 budget were less or about the same as those in budgets passed  in previous years by Democrat legislative majorities. Again with the inconvenient facts.

Most of the lost public school jobs had originally been funded in 2009 by BarryO’s stimulus package.  We conservatives got shouted down and run over by the at-the-time Democrat majorities when we asked HOW those jobs would be paid for, once Barry’s stimulus funds ran out.  Nobody who cheered for the stimulus figured out how to pay for those jobs after 2011, so many of them went away.  Barry and Bev and their friends share a good chunk of the blame for ANY school jobs that went away.

It’s pathetic to watch a failed politician try to save her job by lying and scaring the people she’s supposed to be serving.  I’m going to have to respond to this Boss Bev tactic in the same  way I — and many of my fellow UNC basketball fans — reacted to her the other night in The Dean Dome.