I am sensing a pattern here :   Beaufort, Craven, Davidson.    (You folks in Edgecombe, Forsyth, Franklin, Granville and Guilford better get ready.)

Controversy between a county GOP organization and the state GOP has been becoming quite common.  It now appears to be rearing its ugly head in Beaufort County. Things have come to a head with the resignation of Charles Hickman, a longtime county GOP leader, from the board of elections:

For those who may not know — “Dr. Blinson” is Delma Blinson, a longtime educator in the area and a Tea Party devotee.  He edits the very popular Beaufort Observer news web site. I have come to be acquainted with Dr. Blinson as a colleague on the starboard side of the blogosphere.   I’ve found him to be tough as nails — the kind of guy that politicos interested in shenanigans do not want in a position of influence.  More:

As background —  Ashley Woolard was a campaign strategist for former GOP state House candidate Arthur Williams. (Dority was a GOP candidate for auditor who, surprisingly, refused a runoff and stuck the state with Debra Goldman.)   Williams was a former Democrat legislator who was reportedly talked into switching parties and running for his old seat by speaker Thom Tillis.  Williams and Woolard were frequent targets for criticism by The Beaufort Observer.   (The Observer also later linked Dority to the Williams campaign. ) MORE: 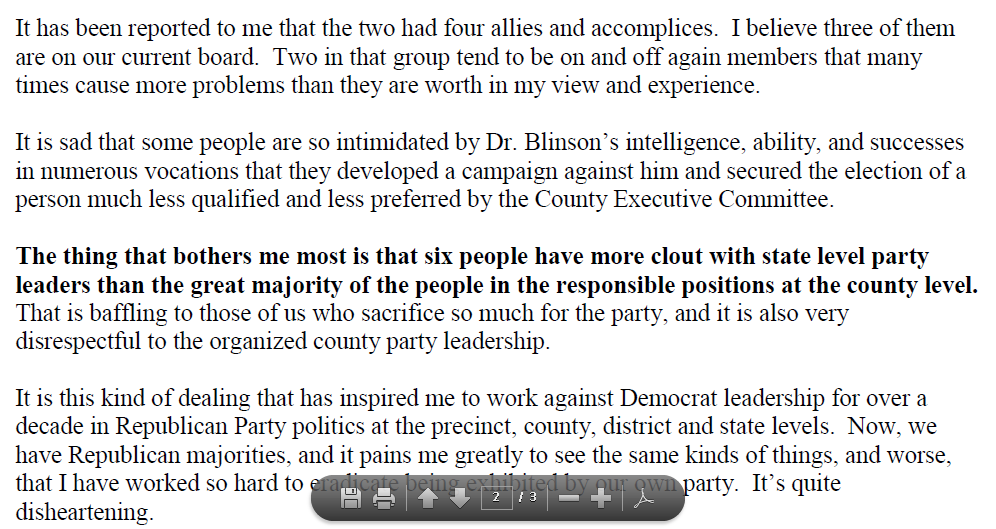