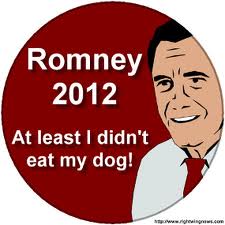 Nope.  This is not a late April Fool’s joke.  Nope. I did not get this from The Enquirer.  This comes from Barry Obama’s own book:

It’s been obvious since the White House started to capitalize on the 1983 story of Seamus, a dog owned by Mitt and Ann Romney that famously got diarrhea during a vacation after riding in a dog carrier on top of the family car, that the craven and corrupt mainstream media intended to do all they could to aid and abet this dumb distraction. But the power of New Media has just taken this shiny toy away from Obama’s MSM Palace Guards and proves that the power of the MSM has diminished considerably since 2008.

As recently as this week, ABC Nightly News anchor Diane Sawyer brought Seamus up in an interview with the Romneys, and you can bet money this was an intentional political move on Ms. Sawyer’s part. These kinds of distractions help to turn the candidate into a punchline and distract from his message — which is the whole idea. Romney talked about many thing during the interview, including his vision for the country, but other media allies of Obama made sure Seamus was the primary talking point to come out of it.

This is how the media works and this is how they intended to work throughout all of  2012 because their guy, Their Precious One, cannot win on his failed record. Trust me, we were going to hear a lot about Seamus in the coming months from both the White House and their media allies.

Thanks to a tip sent to him by a reader/citizen journalist, Treacher wrote a story about President Obama eating a dog.

Can you name the author of this quote?

“With Lolo, I learned how to eat small green chill peppers raw with dinner (plenty of rice), and, away from the dinner table, I was introduced to dog meat (tough), snake meat (tougher), and roasted grasshopper (crunchy). Like many Indonesians, Lolo followed a brand of Islam that could make room for the remnants of more ancient animist and Hindu faiths. He explained that a man took on the powers of whatever he ate: One day soon, he promised, he would bring home a piece of tiger meat for us to share.”

Yep, that’s Barack Obama, writing about his childhood with his stepfather Lolo Soetoro in Indonesia, from Chapter Two of his bestseller Dreams from My Father: A Story of Race and Inheritance.

(Please read ALL of Treacher’s article and the updates. He not only broke the story but is doing a great job of recording how it’s grown from there. You should also follow Treacher on Twitter. He’s having a ball with this.)

From there, Treacher got on Twitter and with the help of thousands of citizen journalists, and without any help from the media, the story exploded. It not only exploded, it exploded to the point where the media couldn’t ignore it and were forced to grudgingly report that …President Obama ate a dog.

There are two things going on here. The first is that any traction Obama and his media allies hoped to gain from Seamus over the next six months is now gone. No one is going to forget that Obama ate a dog and my guess is that this cynical attempt to capitalize on what happened 30 years ago just blew up in their face. Any reference to Seamus by the media or White House supporters (bit I repeat myself) will only remind people of Obama’s dog-eating episode. Moreover, Obama probably won’t be seen with his own dog, Bo, after this. The jokes are just too easy.

But the bigger story is that all on its own New Media did this, and that is not a small thing. In 2008 there was no Twitter and therefore no way to start a national conversation and narrative without the media’s help. In 2008, narratives damaging to Obama were stifled and ignored by the media, and the only “distractions” created were aimed at McCain and Palin by guys like Ben Smith (the Lex Luthor of distractions).

In 2008, there’s no way in hell the MSM ever would’ve ever allowed the news that Obama ate a dog to kill the richness of their beloved Seamus narrative, and no one would’ve been able to force them to.

It’s 2012: The Era of New Media and Citizen Journalists.