Puerto Rico — a poverty-ridden, crime-infested social welfare state – needs money.  And it looks like Paul Ryan and the Republican Congress want to give it to them:

During negotiations of the omnibus budget deal at the end of 2015, House Republican Speaker

The House Natural Resources Committee is drafting a rescue package for Puerto Rico. Hearings on the measure will begin this week. The House conservative Republican Study Committee blasted an early draft of the Puerto Rico legislation, calling it a “bankruptcy-style involuntary restructuring.”

Rep. Bill Flores (R-TX), Chair of the RSC, said in a statement. “This approach is inconsistent with the Republican Study Committee’s position on this issue.”

The island and its supporters in Congress are seeking legislation to grant the territory access to federal bankruptcy courts to unload some of its debt. Currently, Puerto Rico is prohibited from seeking debt relief through bankruptcy.

In February, the RSC took a position against granting Puerto Rico access to bankruptcy courts. “Changing the rules mid-game would be unfair to Puerto Rico’s creditors who entered into these arrangements with agreed upon terms and would delegitimize future transactions,” the RSC position said. “Instead, Congress should consider pro-growth reforms that will spur economic development and investment in Puerto Rico.”

Puerto Rico has many advantages that ought to make the island a beacon for economic growth. Its residents are U.S. citizens, but are not subject to federal income taxes. Unfortunately, the island has been subject to many Congressional-mandated requirements and regulations. It has a bloated public sector and government spending has been exploding.[…]

[…] Last week, Puerto Rico started defaulting on at least part of that debt, missing $37 million in payments due, and indicating more missed payments to come.

The root of the problem is Puerto Rico’s economy, which no longer reflects the island’s name. Only 40 percent of the adult population is even in the workforce, with about a third working for the government, paid by the Island’s taxpayers. With 12.5% unemployment, the Island’s population is declining, down 5% in the last 5 years. Those leaving are the most productive professionals, taking their incomes and tax payments with them. 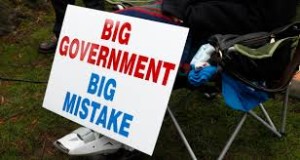 Under U.S. law, cities and towns can file for bankruptcy, but states and territories cannot. Yet, special legislation enacted by Congress in 1984 denied bankruptcy for Puerto Rico’s municipal governments, agencies and bureaus, as well as for the entire Island’s government. Moreover, all of the Island’s government bonds are exempt from U.S. taxation. Counterproductively, these two factors made lending to Puerto Rico’s government at low interest rates intensely attractive for U.S. lenders.

Conservatives and Republicans cannot support a taxpayer bailout of Puerto Rico. That would just reward fiscal profligacy and failure. Such a bailout would become a model for every liberal, overspending city in America to avoid overdue policy reforms and paying back its debt. The politics of the 2008 Wall Street bailouts were murder for Republicans, and they cannot go anywhere near that again.[…]

No joke.  There better not be ANYONE with (R-NC) next to their name supporting this.

4 thoughts on “Bailing out Puerto Rico”