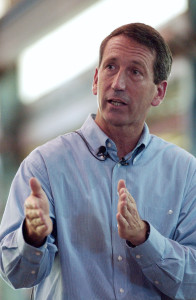 A political chain reaction was set off earlier this year, south of our southern border, when Jim DeMint resigned from the US Senate and was replaced by congressman Tim Scott.   Scott’s Charleston-based seat came up for grabs in a special election.  Two candidates — Curtis Bostic and Mark Sanford (yes, the former governor, Appalachian Trail hiker and occupant of said congressional seat) — are facing off in a runoff for the right to go to Washington to finish out Scott’s House term.

The DC chattering class is concerned that a Sanford victory could revive the Democrats’ “war on women” attack on Republicans.  (For some reason, Bill Clinton’s intern molestations in The Oval Office and Teddy Kennedy’s decades of pantsless sexual hijinks didn’t seem to tar the Democrats as anti-woman.)    Ann Coulter, the epitome of the alpha female, went nuclear on Sanford.

As a former journalist and current political operative in both Carolinas, let me educate folks about the climate down here in these parts.  An awful lot of folks on both sides of the border don’t take kindly to Yankees or other outsiders lecturing them on “proper behavior.”   Lefties from across the country and around the world spent 30 years carpet-bombing Jesse Helms with smear after smear, but the voters of North Carolina kept sending him back to DC.   Fritz Hollings and Strom Thurmond — each with their very distinctive and, um, colorful personalities — had a death-grip on South Carolina’s US Senate seats for decades.  Moaning and whining from DC and NY about the comments and antics emanating from those two didn’t sway SC voters one bit.

South Carolina has gone a lot more red than North Carolina has.  On this side of the border, we — unfortunately – -will give Democrats a chance.  The South Carolina Democrat Party, however, is a mess.  Their highest-ranking standard bearer is addle-brained race baiter Jim Clyburn.    Remember Alvin Greene, the last Democrat nominee against Jim DeMint?  He did nothing but pay his filing fee, and knocked off an establishment-backed party operative.  In South Carolina — with the exception of Clyburn’s congressional district — the GOP primary IS the general election.

Personally, I was appalled by Sanford’s extramarital antics.  I thought he shot himself in the foot, and ruined himself politically forever.  I have an acquaintance affiliated with the campaign of Curtis Bostic, Sanford’s runoff opponent, who set me right on that belief.  This acquaintance told me that his team is very concerned about Sanford:

“Mark Sanford is very popular.  A lot of people STILL love him.  Ol’ Strom had his dalliances with the ladies over the years, and it didn’t seem to hurt him too badly.  This thing is very winnable.  But we do have our work cut out for us. ”

I make it a point to not tell voters, in elections I can’t vote in, what to do.  I can give them factual information, and let them do with it what they want.

Upset about Sanford?  Don’t moan and whine about it in The American Spectator or Town Hall or National Review.  Call your friends in South Carolina and lobby them.  Send money to your favored candidate.  Folks from up north telling us how bad one of our candidates is can be a great way to push us into the arms of said candidate.