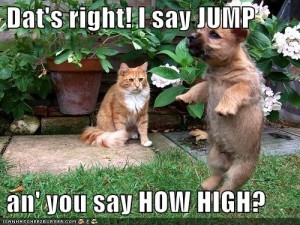 It’s becoming increasingly clear that the state House leadership and the governor’s office are working in tandem.  And NOT in a good way.  Speaker Thom Tillis talks tough about ObamaCare during the campaign.  Mayor Pat wins the governor’s race and begins talking about how ObamaCare is “the law of the land” and the state needs to find the best way to implement it.  Suddenly, Tillis is out and about talking up the idea of finding a “business-like” way to get the health care exchanges done.  (Speaker Thom reversed course on that spin after receiving a monster-sized dose of hell from grassroots activists across the state.)

Speaker Thom and his team had been talking up serious tax reform.  Then, Gov. Pat trots budget director Art Pope out in front of the  media expressing concern about the proposals in front of the legislature.   Now, right on cue, Tillis is talking about being  “cautious” on the idea of tax reform.  Even Rob Christensen, the capo di tutti of the McClatchy Gang, is falling in line with McCrory, Pope, and Tillis on the idea of tax reform:

When the Republicans won control of the state House during the 1994 Republican revolution, one of their battle cries was the elimination of the food tax – which they enacted.

The sales tax is unlike any other tax. It is paid over and over again. It shows up on every sales slip.

Republican arguments that they did it to get rid of the corporate and income taxes won’t fit on a bumper sticker.

Republican lawmakers will also likely anger powerful – and Republican-leaning – constituencies such as retailers, who will not relish being turned into North Carolina’s major tax collector.

The seven states that have no income tax tend to have streams of revenue that North Carolina does not have – oil fields in Texas and Alaska, casinos in Nevada and tourism in Florida.

What????  North Carolina has no tourism?  THAT is about as dishonest /fallacious a statement from Rob as his spin on GOP tax reform efforts.  Tell that to the folks on the coast who get invaded by hordes of Yankees each summer.  Tell it to those of here in Moore County who are seeing more and more unfamiliar folks packing the greens and fairways of our golf courses.

Back in 1994, the income tax was in full effect and relief was sought by eliminating the food tax.  Now, the legislature is talking about dumping the income tax altogether and replacing it with an adjusted sales tax.  Dumping the income tax puts more money back into workers’ pockets so they can decide what’s best for themselves and their families.  Though, I would like to hear and see some more about cutting government spending.

So, now, it appears we small government types will have to fight McClatchy,  and — apparently — Team Charlotte™ (Team Thom + Team Pat).  A politico friend of mine told me earlier this year that the state Senate will be the conservative firewall / voice-of-reason this session.  After watching Tillis and McCrory back off of  (1) voter ID, (2) killing ObamaCare,  (3) The Racial Justice Act, and now tax reform,  we’re going to need all the help we can get from the General Assembly’s upper chamber.

3 thoughts on “As Gov. Pat goes, so goes Speaker Thom”