Erick Erickson over at RedState agrees with us.  The Ruling Class is working together in DC to screw over the rest of us:

In 2011, Barack Obama said he did not have the constitutional authority to do what he is going to announce today. […] 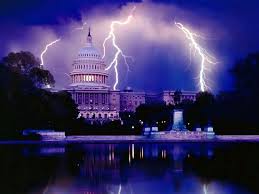 The only thing to change between 2011 and now are two elections — one of which saw President Obama win after saying this. The other saw both he and his party go down to defeat after suggesting he had changed his mind. In other words, the status quo of public opposition (even among Hispanic voters) to a unilateral decision by fiat remains.

What also remains is a Republican leadership that wants amnesty too. The Republican leaders know they must put on a dramatic display for the public, but they are already stacking the deck to ensure Barack Obama gets away with what he is doing.

Exhibit A is House Appropriations Chairman Hal Rogers who, just Tuesday, suggested legislation rescinding funding for the President’s action. That would have to wait till January — two months after implementation had begun. It would also then be vetoed and Rogers would not be able to get the votes to override the veto.

Congressman Rep. Tom Cole (R-OK)46%, also an appropriator, wants to pass appropriations bills and later rescind funding too. Again, this would be vetoed and there would not be enough votes to override the President’s veto. So the funding would go through. The President’s amnesty plan would be implemented.

In fact, the only way to stop the President is to be willing to grind government to a halt. That’s it. They can say there are other ways, but there are none. Anything they do to undo President Obama’s amnesty plan can be vetoed. They then do not have the votes to override the veto.

There is only one thing Republicans can do that President Obama cannot veto. They can shut down the government.

Republicans will tell you they can sue the President or expand their existing lawsuit. But that lawsuit won’t be resolved until he is out of office and his amnesty has been in effect for several years. It is theater.

They have no options because they are not willing to shut down the government to force his hand. They’ve already given him a blank check on the debt ceiling. There are no other options.

And, to be frank, some of the people huffing and puffing the loudest that there are other options are also some of the biggest proponents of amnesty. They want it. They privately agree with the outcome even if they don’t like the means by which it occurs. So they will huff and puff and claim no precedents have been established, then they will let it go through.

Again, the GOP must grind the government to a halt to stop President Obama. Any other legislative mechanism can be vetoed and they don’t have the votes to override a veto. But the GOP won’t bother shutting down the government because the leadership wants exactly the same outcome as President Obama wants — they just object to the means.

It really is striking to me that the GOP just won a massive wave election and they’ve chosen to surrender before the fight even starts. McConnell’s insistence that the GOP won’t shut down the government was all the incentive Barack Obama needed to go ahead and grant amnesty. Republicans are just enablers.

Virginia Foxx has already publicly surrendered on amnesty.  You know Renee Ellmers and Patrick McHenry are not far behind.  Walter Jones — so far — is the only member of the North Carolina delegation to show some spine and stand up for the people back home and the country as a whole.

That whole holding your nose thing sure has worked out well, hasn’t it?  No matter how much you get lied to or ignored, you’ll still show up in droves to vote for these people with that stupid clothespin on your nose. Just because Republican candidate X is NOT one of those dirty Democrats.  So, basically, you nose-holders have communicated loud and clear to these politicians that there are NO negative consequences for lying to you or ignoring you.

We’re stuck with most of these people for two more years.  But, we can still give them hell.  STOP donating money to organizations that have lobbyists that line these people’s pockets.  Burn up the phone lines on Capitol Hill (202-224-3121 OR 202-225-3121). They pay more attention to a flood of angry callers than they do to emails and letters. Explain to these people that you are a constituent.  Explain to them how many votes you and your extended family can supply for their opponent in the next election cycle  I’ve worked up there, and I know people who have worked up there.  I know how much of a difference a flood of angry phone calls can make.

These people in DC are acting on the interests of their big PAC donors. Hold their feet to the fire and remind them that WE put them into the DC glamour life, and we can just as easily evict them.

2 thoughts on “Amnesty: It’s here. Time is running out to save our country.”