Will you accept that Hillary beat you, and move on? 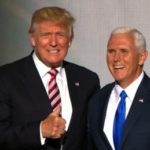 THAT is the question the drive by media is peppering Donald Trump with THREE WEEKS out from the election.  Of course, it came up in last night’s debate.  When Trump refused to take the bait, Chris Wallace — ever the bitchy little chihuaha — started shrieking about “peaceful transition of power” and stuff like that.  As though Trump is the incumbent with control of the military and the rest of the national security apparatus.

It’s funny THAT issue is being pushed at Republicans.  Democrats are the last ones on record as not accepting the results of a presidential race.  Anyone remember 2000?

It looked like George W. Bush had lost the popular vote, but had won the electoral votes.  The Gore campaign and the Democrats screamed bl

oody murder and lawyered up.  Gore held off on conceding while things got debated in the Florida AND US Supreme Courts.  We had the sitting VP of the US dragging his feet on the question of leaving office.  You know, the whole “peaceful transfer of power” thingie.

Even after things were settled in Bush’s favor, the Democrats were sore losers.  Leftist groups protested at the inaugural parade. Democrats questioned the legitimacy of the Bush presidency throughout his first term.

God, I hate these liars.

2 thoughts on “Accepting The Results”