now about you.  But around here, we get all a-tingly when word comes of a PRESS CONFERENCE.

Let’s see who we have here.  First up, Stephen Ross — who we last saw trying to toss that silly requirement for competitive bidding and project advertising.  We also have David Lewis — the ONLY House Republican who went on record in support of expanding Medicaid and implementing ObamaCare.  We also have Jon Hardister — a Republican apparently enamored with gay marriage.

It’s no surprise Tim is all for this.  He got taxpayer money to renovate his “historic” law office back home.

Enough RINOs (rhinos) here for an African safari — or a trip to the NC Zoo.

Let’s not forget the two Democrats — Rep. Rick Glazier and the McCrory administration’s Cultural Resources Secretary.   *THIS ought to be good.* 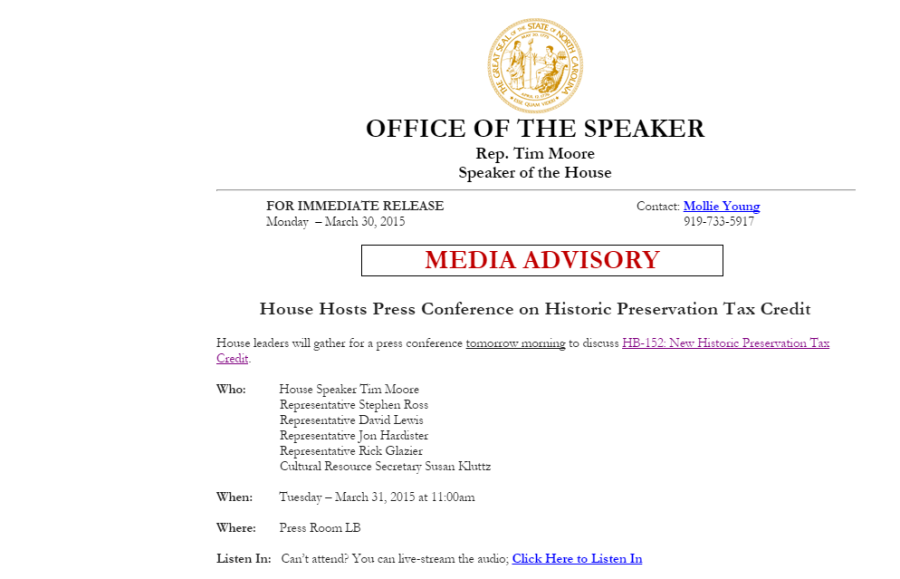 Anyway, let’s get back to the meat and potatoes.  Last session, the GOP majority killed off these tax credits for “historic preservation.”  Now, they’re trying to bring them back.  It’s interesting — in light of all the whining about not having enough money for education and road construction — that the honorables have come up with yet another way for certain people to avoid coughing up some revenue.

nt has an interesting take on the definition of “historic.” When I think ”historic,” I think of something tied to a person or event likely to be written up in history books or captured in literature or film for posterity.  Government — at the federal, state, and local levels — appears to define “historic” as anything 50 years old or older.  (So, I am missing historic status by a gray hair.)

I hate to break it to these people, but there is a difference between historic — and OLD.  My amigo — who posts here under the name ” Ham Biscuit” — exceeds the 50 year old age limit.  The government would consider him historic.  (Maybe I can catch a few tax breaks with him.)  However, most of us around here just consider ol’ H.B.  OLD.

These historic preservation programs often turn into an excuse to lay down more red tape in the planning and zoning process.  I have an acquaintance who opened a pub in “historic” downtown Pinehurst.  He wanted to establish outdoor seating.  The village planner said NO.  Why?  The sidewalk outside the pub was deemed “historic.”

Did something important happen on that sidewalk? Maybe to somebody.  But not to you or me or the history books.

This is not much different than the corporate welfare doled out to big corporations in an attempt to bribe them to move here or stay here. I am sure there are a number of developers with deep pockets who are salivating over the thought of this bill passing.

The state is picking winners and losers at the expense of the rest of us. The correct vote on this legislation is a big, fat “historic” NO.