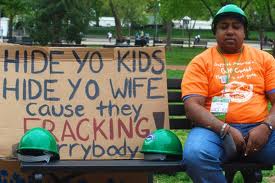 Blogger Steve Maley is quite an authority on the oil and gas business.  He makes his living searching for viable sources of oil and gas.  Maley also does a good job of combating the radical environmentalists and their mainstream media allies with cold hard facts and science.

In one of his more recent posts, Maley takes on the fracking debate in New Jersey:

New Jersey Governor Chris Christie issued a conditional veto on a measure that would have imposed a permanent ban on hydraulic fracturing — a/k/a “fracking” — in the Garden State. Instead, Christie has suggested a year-long moratorium on the practice.

The debate over fracking in New Jersey is mostly symbolic. New Jersey has exactly zero oil and gas wells. It is, however, the nation’s #7 natural gas consuming state (5% of the nation’s total consumption), ranking ahead of Texas. Since 90% of gas wells are completed with a frac treatment, an anti-fracking New Jersey is a little like an obstetrician who promotes total celibacy among his patients.

Fracking is a treatment process that is applied once a well is drilled. It lasts from a few hours to a few days: sand-laden fluid is pumped downhole in sufficient quantity and pressure to induce cracks or fractures in the rock. The sand holds the cracks open and allows fluid to flow in an otherwise impermeable rock. Horizontally drilled wells, once they’re fracked, can produce shale beds once thought to be of little commercial value. The shale gas drilling boom has been so successful it’s keeping natural gas prices low nationwide.

The gas drilling boom in Pennsylvania’s Marcellus Shale trend has heightened the profile of gas drilling in the Northeast. While Pennsylvania enjoys its economic boom, New York has banned fracking, which is effectively a ban on new gas well drilling.

The Marcellus shale is not commercially viable for natural gas in New Jersey. Where it exists, it is not sufficiently deep to support production. But the deeper Utica shale is more extensive than the Marcellus, and successful results in the Utica in Ohio and Quebec have anti-gas interests in New Jersey worried.

As this map at geology.com shows, the Utica does extend over extreme northwestern New Jersey — but just barely.

Opposition to fracking is so hysterical and so detached from the facts that it is almost funny:

“This is a dismal day for New Jersey,[“] Delaware Riverkeeper Maya van Rossum said. “Governor Christie had the opportunity to stand up for clean water and to protect present and future generations from the ravages of fracking in New Jersey, instead he opted for a political out, a conditional veto that opens the door to fracking and drilling in New Jersey’s future, including all the poisoning of the water, air, land and people it brings.

“Exxon, Shell, Hess, and other drilling big wigs have been lobbying long and hard to get Christie’s support for fracking, it seems they are succeeding,” van Rossum said. “Fracking for gas ruins drinking water and the environment; the practice isn’t safe and can’t be made safe. The terrible truth is that New Jersey’s 8.8 million people packed into an 8,722 square mile area, the most densely populated state in the nation, have nowhere to go to replace a contaminated water supply.”

Fracking happens at depths thousands of feet below fresh water supplies. Every state has well construction regulations which require multiple barriers to protect fresh water resources. The notion that “the practice isn’t safe and can’t be made safe” are the words of a modern-day Luddite.

Natural gas is nearly the ideal fuel: it’s clean, abundant, affordable and American. Despite the claims of charlatan filmmakers and environmental extremists, it can be developed with minimal impact on the environment and on freshwater supplies.

Several energy interests are looking to start up fracking operations in North Carolina.  The environmentalist are working hard to whip the state’s residents into hysteria, with stories like the purple squirrel in Pennsylvania:

A bright purple squirrel trapped by a Pennsylvania couple has experts offering all sorts of theories — but no concrete answers.

Percy and Connie Emert from Jersey Shore, Pa., trapped the brightly colored creature while trying to keep the birds safe in their backyard feeder, reported Accuweather.com. They told the weather service they had no explanation for the rodent’s deep purple color.

“We have no idea whatsoever. It’s really purple. People think we dyed it, but honestly, we just found it and it was purple,” the Emerts told Accuweather.

Experts queried by Accuweather had several theories for the unusual look, but no hard answers. Indeed, Krish Pillai, a professor at Lock Haven University of Pennsylvania, told Accuweather he thought the coloring was dangerous for the animal.

“This is not good at all. That color looks very much like Tyrian purple. It is a natural organobromide compound seen in molluscs and rarely found in land animals. The squirrel (possibly) has too much bromide in its system,” he said.

Some AccuWeather.com meteorologists had their own theories. Expert Senior Meteorologist Henry Margusity thought it was merely an accident.

“The squirrel could have been looking for somewhere warm and fallen into a port-a-potty or something similar,” he said,

Henry Kacprzyk, a curator at the Pittsburgh Zoo, said Thursday he thought it looked like a gray squirrel tinged in purple, after looking at a picture of the critter on an iPhone.

And strange as it sounds, he thought Margusity’s toilet theory might hold water.

“I’ve got to think one of the suggestions might be it fell in a Porta John that had blue coloration,” he said with a chuckle. “I have no idea why … but I don’t think it was born that way.”

When asked about the suggestions by some people in online forums of the potential impact of fracking fluid, Kacprzyk said the composition of such fluids in Pennsylvania wasn’t known. “My guess there is if you don’t know something, is that there’s no scientific proof to that. … I would find it amazing that it had that kind of effect,” he said.  […]

Don’t say it, if you don’t know — for sure — if it’s true.  That’s a great rule to follow in life.  (But if politicians practiced it, what would C-SPAN have to broadcast?)

Maley points out on his blog that sometimes — when environmentalists pitch a fit, you need to look at who, specifically is financing SAID fit:

From 2007 until 2010, Chesapeake Energy and its employees donated $26 million to the Sierra Club for the purpose of conducting an anti-coal campaign.

Hmmm.  Paying off a third party to discredit your business competitor.  Interesting …