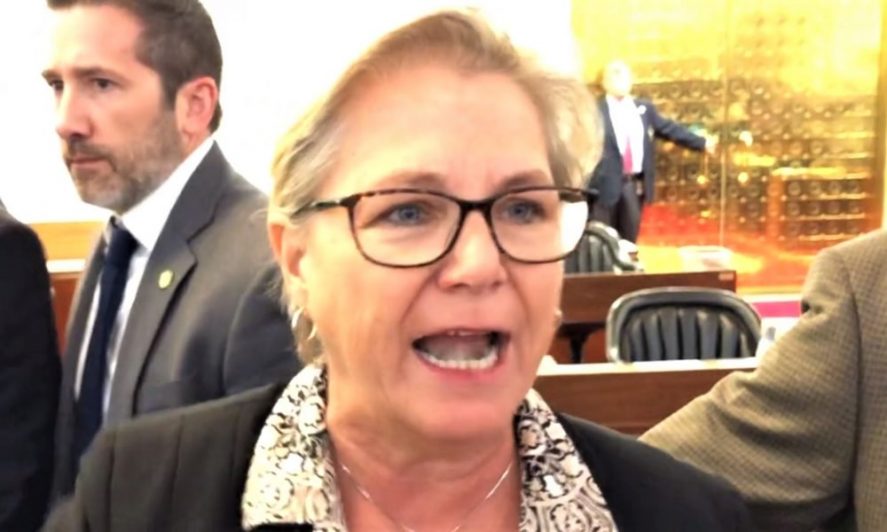 If you were watching the goings-on on Jones Street yesterday,  you might have thought you stumbled across a C-SPAN broadcast of the British House of Commons.  THAT is the place where they tend to get rowdy and bawdy.

Rep. Deb Butler (D-Wilmington) caught wind that Speaker Timmy planned to bring the budget veto up for an override vote while hardly any Democrats were present.  (You may remember Deb for her ghoulish televised in-the-kitchen sessions during her failed 2012 state senate run.)

Ms. Butler was of the belief that Speaker Timmy and his sidekick, Mr. Lewis, were being shady.  (In most cases, that would be a good assumption.)   Butler claimed — at maximum volume — that the speaker’s office had claimed there would be no votes that day.  Thereby encouraging a lot of Dems to partake in activities away from the legislative building.  The veto override passed the House 55-9.   (There are a total  of 120 members in the full state House.)

Speaker Timmy issued these talking points to defend himself and his caucus from the outrage of Butler and her acolytes in the drive-by media:

·         The budget veto override was taken during a House floor session with a properly noticed calendar following two public announcements votes would be taken on Wednesday.

o   House Republicans never planned to attempt a veto override on Wednesday, nor were they aware House Democrats were falsely told by their own leadership of a no-vote session.

o   House Republicans had only 55 members in session on Wednesday morning – not even enough to hold a majority on the floor with all members present.

o   By their numbers alone, it is obvious House Republicans never planned to override the veto Wednesday.

o   The editor of the News & Observer’s ‘Insider’ Colin Campbell  tweeted the following: “So much misinformation going around the #ncga today: -Only one Democratic House member has been confirmed as attending a 9/11 event during the veto override vote.”

o   Governor Roy Cooper said in a noon press conference (4:45 mark) Wednesday that he did not see and was not aware of any House Democrats at a ceremony he attended, directly contradicting a false narrative spun by national media outlets like the Washington Post

Hmmm.   That sounds like it violates the court order on gerrymandering that got handed down.  All efforts to remedy the situation are required to be transparent.

o   The North Carolina House held its commemoration session for 9/11 first responders and victims in its afternoon session on Wednesday.

o   The narrative that the budget veto override vote on Wednesday had anything to do with 9/11 ceremonies is a provably false fabrication debunked by extremely credible sources – the House Democrats themselves – and any reproduction of this narrative is simply spreading a lie.

·         Democrats meeting privately about ongoing redistricting in the General Assembly – particularly with all of their members of the House Redistricting Committee together – is a potential violation of a three-judge panel’s order that redistricting committee efforts take place in public view.

·         The Governor falsely alleged in his press conference that Republicans “orchestrated” the veto override and Democrats “were lied to.”  This is a complete and total fabrication that he must retract immediately and cease misleading North Carolinians about the circumstances.

·         The Speaker frequently announces no-vote legislative sessions for members’ planning purposes, often at least once or twice a week.

o   The announcement is made by the Speaker from the floor of the House, by email from the Speaker’s office to all members, or both

o   The announcement is often shared on social media to make the broader General Assembly community aware of a no-vote legislative session.

o   None of the customary public announcements were ever made of a no-vote session Wednesday by the Speaker’s office.

o   To assume a no-vote session based on private oral conversations about specific bills is an erroneous presumption by House Democrats’ leadership that ignores the consistent procedures of the House for notifying members of a no-vote session.

·         The Speaker’s office relies on public announcements of no-vote sessions from the floor of the House and by direct communication to all members to avoid exactly this type of confusion.

o   In three terms as the presiding officer, Speaker Moore has never, and would never, announce a no-vote session then hold votes that session.

·         Speaker Moore is serving his ninth term in the state House, as is House Rules Committee Chairman David Lewis.  They have a combined 36 years of experience serving in the North Carolina General Assembly.

o   Both leaders have far too much respect for the North Carolina House and their colleagues to announce no recorded votes, then hold a vote.

·         In Tuesday afternoon’s no-vote legislative session at 4:30 p.m. on September 10, 2019, North Carolina House Republicans likely had the votes on the floor to override the Governor’s budget veto.

o   Chairman Lewis was presiding at the time but did not take a vote, because Speaker Moore had announced in that morning’s session that Tuesday afternoon would be a no-vote session.

·         In Tuesday afternoon’s session, Chairman Lewis announced publicly the intention to take recorded votes the following day on two appropriations bills that were directed to Wednesday’s calendar “without objection.”

o   When adding both bills to the calendar on Tuesday, Chairman Lewis explicitly announced that there would berecorded votes on Wednesday (5:20 mark of the session’s House audio archive.)

·         Shortly after Chairman Lewis announced intention to take recorded votes on the two budget bills the following day, he announced a start time of 8:30 a.m. for Wednesday.

·         The Speaker of the House, present members of the House, and staff, were all planning to hold recorded votes on bills on the published calendar for Wednesday’s morning session

·         The consideration of the veto override was properly noticed and published on the House calendar, as it has been for nearly 2 months.

o   The House clerks and staff conducted standard preparation for a voting session.

·         House Republicans clearly, by their numbers, had no plans to attempt a veto override on Wednesday:

o   Republicans did not have enough votes to maintain a majority on the floor if all members were voting and present, with just 55 members.

o   The Republican caucus had 10 of its members missing from its 65-member majority.

o   Any suggestion that Republicans planned the veto override on Wednesday – which is demonstrably false – is an outright lie.

·         The House Republican caucus was genuinely confused and surprised when the Democrats did not arrive for the 8:30 am voting session.

o   The veto override was never planned, discussed, or considered, by House leaders or staff until Wednesday morning’s session when Democrats did not arrive

o   House Republicans were completely transparent about what happened.  They held a public press conference, answered questions from the media, and Speaker Moore joined Capital Tonight on Spectrum News the day of the vote after speaking with reporters throughout the day.

·         The Speaker has said repeatedly he would hold the veto override when the votes were secured on the floor of the House in a voting session.

·         He did so, advancing a historic school construction initiative in education communities across the state, more than $100 million in disaster relief funds, and another round of tax relief for North Carolina families.

Thank you for your review of these facts that completely dispel false claims that House Democrats were misled on Wednesday, or that they were attending 9/11 ceremonies during the vote, or that House Republicans planned to attempt the veto override on Wednesday. […]

Some thoughts:   A session with NO VOTES is a waste of taxpayer money in my book.   You’re clearly not doing anything productive to benefit the folks  back home.

Also,  give me a cotton-picking break on the sneaky-vote accusations.  Democrats, when they were in charge on Jones Street, did the same thing they are hollering about the Republicans doing now.  (Refresh my memory.  HOW did we get a lottery?)

It’s fun  to see House leaders in combat mode rather than footsie mode with the other side of the aisle.  There needs to be more.  We elected them to fight godless socialism, not cut deals with it.

7 thoughts on “#ncga: As the House Screams”