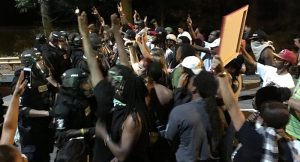 Leftists are famous for blaming everyone and everyone BUT the honest-to-god culprit(s) when the feces hit the fan.  *As you know, guns kill people.  People don’t kill people.*

Once again, we’re seeing it with the riots – NOT protests — in Charlotte.   Innocent people are being beaten. Innocent people are being threatened and assaulted as they simply try to drive home.  Private property is being vandalized and destroyed.  Stuff we’ve seen in news footage from The Middle East and Latin America has come to our doorstep.  And what do the Democrat Party and its activist Left ‘muscle’ have to say about it?:

The bodycam video?   *Produce video of Planned Parenthood buying and selling baby parts or ACORN committing financial or vote fraud?  THAT tape was selectively edited to take things out of context.*

It’s EVIDENCE in a legal proceeding.  A criminal investigation.   Release it now to the media, and THEN try to find a panel of impartial jurors.  The average person on the street doesn’t have the proper training to evaluate a deadly-force situation in law enforcement.  It’s also like seeing the sausage being made — or the brain surgery being conducted.  What you’re seeing may be absolutely proper and above-board, but to someone who doesn’t see it every day it may look horrifying.

That Constitution thingie guarantees all American citizens due process.   Their day in court.  A chance to face their accusers and have their testimony and the evidence evaluated by a judge and jury.

There’s the old saw about how five people who observe the same traffic accident will give you five different accounts of the incident.  THAT is one of the reasons we don’t try people on the street.  THAT is why people go in front of a judge and jury under oath.  The system — as imperfect as it is — is there to provide a framework for getting to the bottom of a dispute in a manner that is as fair as possible to all sides.

It’s savagery that we expect more from the animal kingdom or The Third World — not North America’s banking center.  Not in the society that has forever been upheld as the worldwide model for freedom and democracy.