Kay Hagan (D-NC) and Claire McCaskill (D-MO) have got nothing on Sarah-Jessica and the girls from “Sex & The City.” The leaders of the “angry man-hating pant-suited broad” caucus in the US Senate have see the enemy — and it is men in uniform.

We’ve got some very serious situations going on around the world, and these two dingbats want to subject our fighting men to the most hellish feminist studies seminar imaginable.

(By the way NRSC,  on behalf of all of America, I’d like to thank you for helping to give us six more years of Claire Bear.  She’s such a delight.)  McCaskill has blocked the promotion of a female officer for refusing to prosecute — for lack of evidence — a male officer accused of sexual harrassment.

Somebody *really smart* has apparently told ol’ Kay — affectionately known in these parts as Sen. Chuck Schumer’s sock puppet — that she should stake her whole re-election, in a state with one of the largest populations of retired and active duty service members and their families, on painting our men in uniform as perverts, thugs and criminals.   Check out what Kay has been mailing out:

Real subtle, huh?  Hold on to your hats, it gets better: 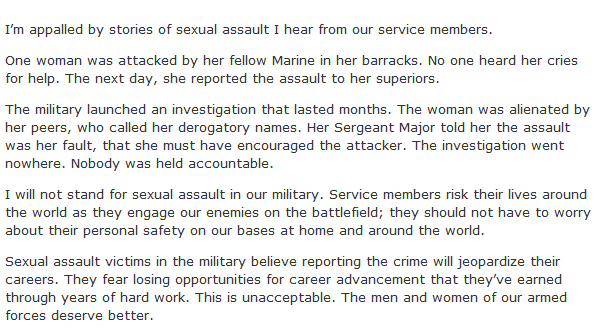 Really?  So — in the middle of the war on terror — our guys are on a raping and impregnating spree?  That’s what we’re going with?

In the days since the Defense Department’s May 7 release of its 2012 Annual Report on Sexual Assault in the Military, the media and lawmakers have been abuzz. The report’s estimate that last year 26,000 service members experienced unwanted sexual contact prompted many to conclude, incorrectly, that this reliably estimated the number of victims of sexual assault.

The 2012 estimate was also significantly higher than the last estimate, causing some to proclaim a growing “epidemic” of sexual assault in the military. The truth is that the 26,000 figure is such bad math—derived from an unscientific sample set and extrapolated military-wide—that no conclusions can be drawn from it.

Yet three bills have been introduced in Congress since the report’s release, all intended in various ways as a response to the findings. This week the Senate Appropriations subcommittee, which has power over the Pentagon budget, will hold a hearing where military leaders will be questioned about sexual assault in the armed forces.

It is disheartening to me, as a female officer in the Marine Corps and a judge advocate devoted to the professional practice of law in the military, to see Defense Department leaders and members of Congress deal with this emotionally charged issue without the benefit of solid, verifiable data. The 26,000 estimate is based on the 2012 Workplace and Gender Relations Survey of Active Duty Military. The WGRA survey was fielded throughout all branches of the military in September and November 2012. As the report indicates, “Completed surveys were received from 22,792 eligible respondents,” while “the total sample consisted of 108,478 individuals.” In other words, one in five of the active-duty military personnel to whom the survey was sent responded.

I am one of those who responded to the survey after receiving an email with an online link. None of the males in my office received the email, though nearly every other female did. We have no way of knowing the exact number of male or female respondents to the 2012 WGRA survey because that information wasn’t released.

The estimated 26,000 service members who fell victim to unwanted sexual contact in 2012 is higher than the 19,000 estimate based on the 2010 WRGA survey (the survey wasn’t conducted in 2011). Does this mean that there was a 34% jump in just two years? The data are too unreliable to tell. Before 2010, the Defense Department did not extrapolate military-wide in this manner, and for good reason. If you apply the same extrapolations to the 2006 WGRA survey results, you arrive at a far higher number—34,000.

These numbers vary widely because incidents involving unwanted sexual contact cannot accurately be extrapolated military-wide using this survey. The number of active-duty personnel is more than one million. The U.S. military as a whole is 14.6% female. Though the 2012 survey does not specify the gender composition of its respondents, the 2010 respondents were 42% female (10,029 women and 14,000 men).

Nevertheless, to achieve the 26,000 military-wide estimate in 2012 (and 19,000 in 2010) over half of the victims must have been male. Of course, male victims do exist, but empirically males do not constitute anywhere near the majority of victims of unwanted sexual contact—no less sexual assault.

We also don’t know how actual sexual-assault rates in the military compare with civilian society. Last year’s National Defense Authorization Act asked the Defense Department to undertake two major studies that would review judicial proceedings and compare the military system with best practices in civilian jurisdictions. Both studies are set to begin this summer.

The military isn’t averse to changing to assure that all its service members, especially women, are treated justly. But change should come as a result of supportable data.

Each and every sexual assault is tragic and infuriating. But given the military’s recent emphasis on awareness of the problem and insistence that victims come forward, it’s no surprise that this number has gone up.

We in the military justice system want victims to come forward, and to seek accountability through the system. We want them to feel empowered to report, and to know that their command will take the allegation and their recovery seriously. An increasing number of reported sexual assaults, at least in the next few years, should be viewed as a positive sign that this message is being heard.

In my five years in the Marine Corps, I have seen revolutionary change regarding how military leadership addresses sexual assault. Ask the military service member closest to you whether the military takes sexual assault seriously. They will likely talk your ear off about increased training requirements, speeches from their leadership, videos they have watched and workshops they have attended. They can tell you what they have learned about bystander intervention, about alcohol and impaired judgement, and about the hefty consequences within the military justice system for sexual assault.

I often talk to young men and women interested in joining the military, and I find that women especially seek me out to gain the perspective of a female officer. In the past year or so, these potential female recruits have grown increasingly wary, asking many follow-up questions about whether women are treated fairly and respectfully. I tell them that serving in the military doesn’t turn a woman into a victim. I am a proud Marine, surrounded by outstanding military personnel from every service who take this problem seriously, male and female alike.