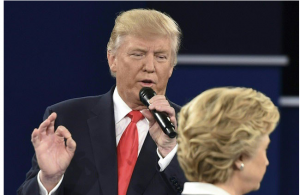 From all indications I’ve seen and heard, The Donald laid a huge smacking-down upon The Wicked Pant-suited Witch last night.

I’ve seen and heard all the butt-hurt out there about the Billy Bush / Donald Trump tape.   Granted, it was not pretty language.  You can be disappointed in the man’s language, but I, for one, am more concerned about what Hillary Clinton HAS DONE or WILL DO than anything Donald Trump has said.  Let’s review. Hillary: jeopardizing national security, ripping off sick and injured Haitians, pay-to-play, Benghazi, Egypt, Syria.    And from the 90s:  The White House travel office, White House FBI files, Whitewater, and bimbo eruptions.

Trump:  Calling Rosie O’Donnell a “fat pig”, and talking dirty with a fellow bachelor about the ladies.

Donald Trump has turned a few million into BILLIONS.  He’s added to local economies via resources and jobs.  He’s a walking-talking success story.  Every story has its ups and downs.  This guy is UP right now and looks to keep going.

I’m pretty comfortable with the advisers he’s gathering around him in the areas of economics, defense and foreign affairs. He’s the kind of guy we need out front negotiating on our behalf and talking tough to people around the world who have been pushing us around for a decade or more.

5 thoughts on “Trump: Closing The Deal”