They’ll call you  a bigot if you don’t want guys dressed like girls in the restroom or locker room with your wives or daughters.  They’re also for stronger protections for barnyard animals than for newborn humans.  Meet Wayne Goodwin’s Democrat Party, 2019 edition.

A very basic piece of legislation — that had been  vetoed by Governor Cooper —  came up before the General Assembly today.  The bill said that, if a baby survived an abortion procedure outside the womb, the attending physicians had a legal responsibility to try and save its life.  Cooper thought that was harsh and unreasonable.

Apparently, most of the Democrats in the General Assembly agreed with their boss.  The legislature FAILED to override the veto of that very humane, very reasonable piece of legislation.

Doctors cite their “oath” when  they provide medical care to wounded terrorists.  Yet, it’s asking too much to help an infant struggling to live.

One of the biggest arguments Democrats put up:  How often does this happen?  Does it happen enough to require a law?

Well, while we’re answering questions, answer me this:  How often do surgeons try to operate blindfolded?  Well, it happened at least once in 2007 in Lumberton, North Carolina.

As someone who’s had surgery in a North Carolina operating room, I am glad there are laws in place to govern conduct of doctors and other operating room  staff. 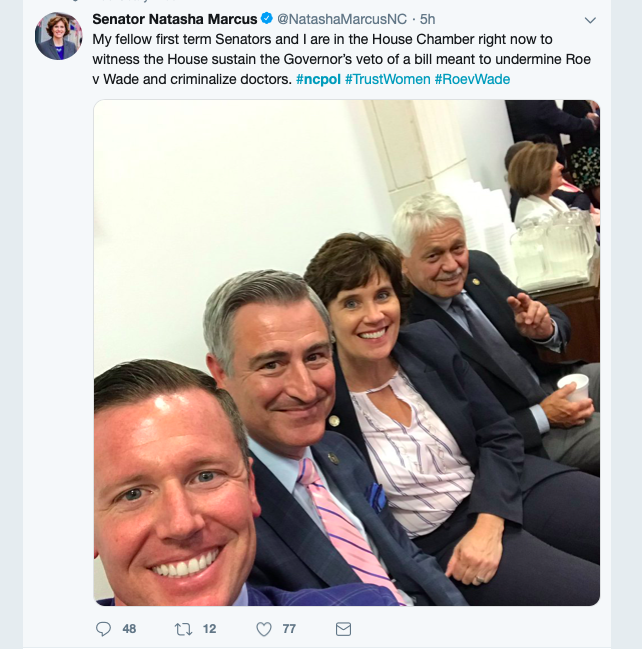 While we’re at it, let’s thrown in some  mental health care for the 77 low-lifes who “liked” this photo.

Democrats gained in 2018 because the NCGOP rolled over and played dead.  Democrats have already signaled they plan to campaign  on trannies in the ladies room. Surely, they’ll boast about today’s travesty as well.

The culture, or lack of it,  in Chapel Hill-Carrboro, Durham and Asheville has taken over the state Democrat Party and, apparently, the state legislature.   If NCGOP leaders can put aside egos and their self-enrichment scams long enough to communicate a positive alternative to the voters,  there might yet be some hope for this state.

5 thoughts on “Trannies in the ladies room + baby killing: NC Democrats in 2019”