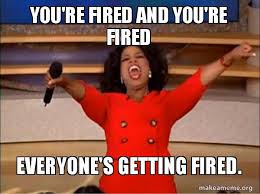 We’ve got a huge pile of uselessness at the top of the food chain in the Moore County Public Schools.  Our superintendent, Bob Grimesey, cried on-cue and on-camera to pull his chestnuts out of the fire and reverse the decision to fire him a few years ago.   The school board — meant to be a source of oversight and the eyes-and-ears of the public — has been reduced to little  more than a Greek chorus and echo chamber for dear ol’ Dr. Bob.

Since nearly being fired, Dr. Bob has become a master of PR and optics.  With the help of a compliant, unquestioning local newspaper, he’s turned the Moore County school system into his own personal fiefdom answerable to NO ONE.

The system blows through its cash?  No problem. Send a few token screaming mommies — and some system employees concerned about job security — to the county commissioners to demand bond issues and tax increases.

The modus operandi in Dr. Bob-Land is to cram authoritarian measures down the throats of parents and taxpayers, and then get the dictation pool at the local paper, and the bumps-on-a-log on the school board,  to help “sell it.”

The current uproar over redistricting is just the latest example of Dr. Bob’s Goebbels-like propaganda skills.  Racial and economic diversity, as well as test scores, are driving this maddening process.   Not common sense or the needs of the kids or any of that “silly” stuff.

I KNOW that the public hearings Dr. Bob conducted were near-riots.  Parents were being force-fed bullcrap and they were tired of it.   The local media was taking dictation for Dr.  Bob and telling its readers that everything is A-OKAY.   People lost patience, and really let their alleged public servants know how they really felt about being ignored and having stuff that threatens their property values and affects their families negatively crammed down their throats. (But according to The Pilot,  everything is just FINE.)

Interestingly though, our local paper is now covering  a handful of parents thrust out there by Dr.  Bob and his minions to complain about the lack of “civility” in discussions about redistricting and other school affairs.

(When someone starts moaning about a lack of “civility,” it is usually a sign that they are aware you are onto them AND their bullcrap, and that you just might lose your cool and slap the hell out of them.)

But what can we do to fix this maddening mess?

Voting for Ed Dennison or Bruce Cunningham because you enjoy their company at Pinehurst cocktail parties is stupid.  Beyond stupid.  Those two have been a big part of the problem FOR YEARS.  Way too many people have voted for Dennison and Cunningham for reasons other than  their performance on that board.  And THAT has to stop.

Pam Thompson — who has lost every race she’s ever run — got elected this time mainly because people in Pinehurst sought advice from  Cunningham and Dennison on whom to vote for.  Her opponent was an outspoken  former schools employee who had a lot of tough questions for Dr. Bob.

And we just couldn’t have THAT, could we?

Helena Wallin-Miller, the current board chairman, spends so much time in the paper defending Dr. Bob and his bureaucrats you’d think she was the paid spokesperson on the system staff.  No watchdog attitude.  No oversight going on there.  She needs to go, too.

The three other empty suits need to go, too.

I know that the school board is not the most exciting, sexy form of public service.  The Pilot ignores it — except when Dr. Bob pages them.  The public is mostly in the dark about what happens in that central office in Carthage.

Even if you don’t have school-age kids, what happens in the the system is important to you.  It affects property values.  The current value of your home will drop like a rock if you are redistricted into a low-performing school’s territory.  The school system affects economic development — whether businesses move here,  whether families keep moving here.

Start paying close attention to these people.  It’s important.  And when  some of them  show up on the election day ballot, vote them out.  It’s time to start showing Dr. Bob who the REAL BOSSES are.

21 thoughts on “Time to give Dr. Bob AND his puppets on the school board THE BOOT”