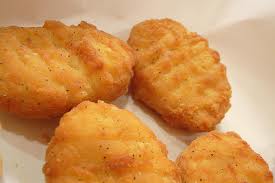 The Hoke County chicken nugget school lunch incident of 2012 led the North Carolina Senate on Thursday to pass a bill to prohibit child care centers from giving food to children whose parents provide them with lunches from home.

“It was a bill to take a little bit of the nanny state’s authority away from them if a kid brings his lunch to school,” said Republican state Sen. Jerry Tillman of Archdale, who crafted the legislation.

It started when a teacher on Jan. 31 made three 4-year-olds in pre-school there get a school-provided lunch, which that day included chicken nuggets, even though the children had brought lunch from home.

One child’s mother was angered that her child brought the home-made lunch back home after school that day and that the family was billed $1.25 for the school lunch. She complained to a state lawmaker.

The mother had packed a turkey sandwich, chips, banana and fruit juice for her daughter.

School staff members were required to evaluate whether home-provided lunches met minimum nutritional standards. If something was missing from a child’s lunch, the staff was supposed to provide the child with the missing element.

In this case, the school has said, the child should have been given milk, not a whole lunch.

If Tillman’s bill becomes law, the staff would not be allowed to give food to kids whose home-made lunches do not meet the minimum nutrition standards set for school-provided lunches.

Tillman acknowledged that some parents may not pack nutritious lunches for their children. Even with his bill, the schools should address those situations, he said.

“The kid may be making their own bad lunch, they may just have Oreos and a candy bar in there. Sometimes that will happen,” Tillman said. “The school then has the responsibility at least to warn the parents that ‘I don’t think this is a good, nutritious lunch, and we will have to make a call to Social Services.’ That’s fine for school people to do that.”

The bill now moves to the state House of Representatives for further consideration.

Ok, wait.  Tillman talks about striking a blow against the nanny state, but then his bill empowers the Department of Social Services — the nerve center of the nanny state.   SCHOOLS DO NOT NEED TO BE IN THE BUSINESS OF PARENTING.  Their job is to instill knowledge and promote literacy so students can enter the adult, working world ready to take care of themselves and   make positive contributions.

I’ve talked with some friends who teach at the elementary and pre-K levels.  They’ve told me horror stories about parents dropping kids off for school with NO LUNCH MONEY and no packed lunch.  I’ve heard stories about pre-K kids arriving at school with a Coke and a bag of potato chips.

I actually know one single mother whose 8 year old boy practically LIVES on Sun Drop and Skittles. I know.  It’s appalling.  But he appears to be quite healthy, and is a great athlete.   (Go figure.)

I am not satisfied or comfortable with letting bureaucrats evaluate parental decision-making on what does or does not go into the lunchbox or lunch bag.   With the pitiful literacy rate among third graders (AND high school grads), I think the public schools have a lot more pressing issues to concern themselves with.

Parents sending the kid to school with no food — and no means for acquiring food —  is grounds for child neglect charges.  THAT’S worth alerting the police.