LIE is the nicest word I can come up with to describe the latest ad from the Thom Tillis reelection campaign. (It’s running every day during Rush’s show. )  Here are some samples of its claims:

Oh, and this hit the paper today: 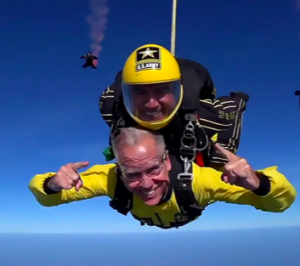 “Somebody” got The N&O footage of Tillis jumping with the Army’s Golden Knights.  Not anyone can do that.  It’s a privilege normally reserved for serious VIPs — like former president George HW Bush.  Tillis’s current seat on the Senate Armed Services Committee likely helped him  make this happen.  And staging a photograph mid-jump?

THAT cost some money.  And the fact that it’s done NOW sure does make it look political.  (What do you want to bet this shows up in future Tillis campaign propaganda?)

Wow.  Failing grades his whole time in office EXCEPT for re-election year.  This guy has voted for special treatment for illegal aliens and quotas for copyrights and trademarks.  Thom Tillis loves government.

Garland Tucker is the best chance we have to correct this mistake from 2014.  Don’t be stupid and fall for this Sandi Smith nonsense.  She and her husband install solar panels for a living.  Their livelihood depends on the solar goons — who happen to be Tillis’s good buddies.  Her purpose in the race is to split the conservative vote to help Tillis slither through the primary to the general.  She’s no different than Mark Harris in 2014.

17 thoughts on “Tillis lying his way to the finish line”