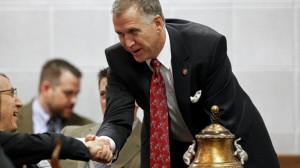 Holy cow.  If you thought Renee Ellmers was one hot PR mess — wait until you get a load of our junior US senator.  We posted earlier about  ol’ Thom’s debut with the Bipartisan Policy Center.    Some of his remarks there are making national headlines. And NOT in a good way:

In a week packed with news over concerns for public health, Sen. Thom Tillis (R-NC) described his own history of opposing certain health and hygiene regulations, including those that require employees to wash their hands after using the bathroom.

During a Q&A at the Bipartisan Policy Center on Monday, Tillis related a story from his time in the state legislature in 2010, complaining that the U.S. is “one of the most regulated nations in the history of the planet,” video via C-SPAN shows.

“I was having a discussion with someone, and we were at a Starbucks in my district, and we were talking about certain regulations where I felt like ‘maybe you should allow businesses to opt out,'” the senator said.

Tillis said his interlocutor was in disbelief, and asked whether he thought businesses should be allowed to “opt out” of requiring employees to wash their hands after using the restroom.

The senator said he’d be fine with it, so long as businesses made this clear in “advertising” and “employment literature.”

So, they can opt out of making employees wash their hands, but they CAN’T opt out of requirements to inform patrons of that policy? Interesting.  MORE:

[…] “I said: ‘I don’t have any problem with Starbucks if they choose to opt out of this policy as long as they post a sign that says “We don’t require our employees to wash their hands after leaving the restroom,” Tillis said.

“The market will take care of that,” he added, to laughter from the audience.

Wrapping up the Q&A, the moderator joked to Tillis, “I’m not sure I’m gonna shake your hand.”

It’s interesting to hear this concern about big government from a guy who forced ”alternative energy mandates” on utilities that jack up costs to consumers. We detected a pattern during the 2014 Senate campaign that suggested Tillis’s campaign positions were shaped by the agendas of his biggest contributors.  It might be worth reviewing his 2014 reports to see if we can spot anyone who might not be a big fan of hand-washing.

We’re as anti- big government as they come.  But one thing we don’t mind is DEMANDING that the people who prepare our food and beverages, and provide dental and medical services to us maintain high standards of hygiene.

14 thoughts on “Tillis: Demanding hand-washing AFTER you pee = government tyranny”