In November, voters across the Carolinas and the nation sent a message to DC loud and clear.  Stop Obama.  Stop Obama’s agenda.

SOMEHOW that got translated to John Boehner and Mitch McConnell  & co. that we want them to partner with Obama and his friends to “get things done.”

Apparently, THAT is the interpretation our new senator Thom Tillis got too.  Yesterday, ol’ Thom was the keynote speaker at something called “The Bipartisan Policy Center’‘ in DC.  Apparently, Thom had so much fun that he took to Twitter to tell the world about it:

So, what is the BPC?  According to their Twitter feed, they are “a think tank founded by Senate Majority Leaders Howard Baker, Tom Daschle, Bob Dole & George Mitchell.” (*Talk about a crew that makes my heart go pitter-patter.*)

Well, our, um, “friends” at McClatchy were on hand to fill us in just what Thom has been up to during his short time inside the beltway:

U.S. Sen. Thom Tillis has been a senator less than a month, but he was the first person chosen to answer questions in the first installment of a new “Agenda Setter Series” on Monday at the Bipartisan Policy Center in Washington.

“You were a management consultant. How would you turn this place around?” Jason Grumet, the president of the Washington non-profit think tank, asked at the beginning of a 45-minute question-and-answer session in front of a packed room and a C-Span camera.

The Republican freshman said he was “building relationships” with members of the Senate, mostly with Democrats. He said he’d met with “seven or eight” Democratic senators one by one so far. Before the talks, he said he did some research on their views on a variety of issues. 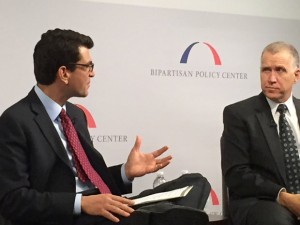 Tillis said he he told one of the Democrats at a recent breakfast meeting that “I’m absolutely convinced that on 80 percent of the issues we disagree, but there were some things that I thought could provide the basis for us working together.”

“I just want to be a part of the group that’s coming in that’s really getting the Senate to move again, getting it to function. Because we’ll never go as quickly as I would like to go, and as quickly as maybe I did in the House, but we can make great progress and a lot of that will be on a bipartisan basis,” the new senator from Huntersville and former North Carolina state House speaker said.

Grumet, when he introduced Tillis, said he believed Tillis would be the most influential member among the 13 new senators who were elected in 2014.

Tillis said that Republicans don’t have the super majority they’d need to override a presidential veto. But even if they did, they’d still have to make sure that the policies they put forward “are the policies the American people want to see,” he said.

Tillis also said that military spending should be put to the same test as other spending when lawmakers look at whether taxpayer money could be used more efficiently. The question should be, he said, “are we actually spending it to its best and highest use?”

Grumet also asked Tillis about the campaign, noting that it was the most expensive Senate race ever, at more than $115 million, including spending by outside groups. Tillis remarked that “two-thirds of it was riding on the other alternative,” referring to incumbent Democratic Sen. Kay Hagan, whom he defeated in November.

“I think that third-party money is a reality,” Tillis said. “I do think there’s something to be said for increased transparency and disclosure. I know that gets people nervous on both sides,” he added, referring to proposals to disclose the source of large contributions for the ads.

But he said he thought the fact that the $80 million spent against him in the end worked against Hagan. He said people got tired of the many months of attack ads.

“I tell you I woke up on Wednesday morning the day after the election and I got misty-eyed when I saw a toothpaste commercial,” Tillis said, getting a laugh.

He said some of the campaign ads in North Carolina contained some “ugly stuff,” including some of by “third parties that were ostensibly supporting us that I was uncomfortable with.”

The mean ads can backfire because they turn off unaffiliated voters, a growing segment of the voting population, he said.

Afterward, Grumet said in a short interview that people like Tillis were important for the prospects of bipartisan cooperation, more so than party moderates.

“The moderates are going to be there when you need them, but the leadership’s going to have to come from people who have real credibility and purchase within their parties. I think Sen. Tillis certainly has that in part because of who he is and in part because of how much enthusiasm and effort there was to help him win his seat,” he said.

From 1992 to 1998, we had two Republican senators representing us in Washington named Jesse Helms and Lauch Faircloth.  From January 2015 until at least January 2017, we’re going to have Thom and Tricky Dick Burr.  Talk about a decline and fall.