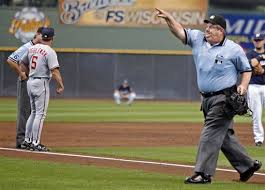 Three strikes and you’re out.  That’s been the rule of thumb in the game of baseball.  It’s been the law in a lot of states’ judicial systems.  It now appears to be worming its way through our nation’s public schools.  Wake County Public Schools — one of the few places left in the state that still wages bitter, partisan school board races — wants to take a page from the playbook of New York City leaders.  *Gosh, when I think of excellence — successful things I want to emulate — I think of New York City.*

NYC school leaders have introduced a three strikes and you’re out rule for “less-serious” student-committed offenses.  So, you can mess up three times before you are sent home to mom and dad.  How’s this going to work in The Triangle?  Here’s how:

Wake County students could receive “three strikes” next year before being suspended for what school leaders consider less serious offenses, such as skipping class or failing to follow a teacher’s orders.

Proposed revisions to the Code of Student Conduct would eliminate out-of-school suspensions for certain nonviolent offenses – unless a student commits the same violation three times during a semester. Principals would be encouraged to use alternatives such as in-school suspension to keep these students in school and learning. […]

The potential changes in Wake are also part of a national trend, as school systems look for alternatives to out-of-school suspensions for infractions that aren’t considered major.

Michael Petrilli, executive vice president of the Thomas B. Fordham Institute, a Washington, D.C.-based education think tank, said he’s concerned that the focus on reducing suspensions could come at the expense of students who want to learn in an environment free from disruptions.

“If a kid is disrupting the learning of other students, maybe we need to suspend them,” Petrilli said. “What we need to have is flexibility. We need to allow adults to exercise their judgment.”

Exactly. So, what is being considered a “lesser offense”?

• Noncompliance – not following the directions of school personnel or volunteers authorized to give directions.

• Disrespect – not exhibiting appropriate respect toward school personnel and volunteers.

• Electronic devices – Using or displaying devices such as cellphones, music players and electronic games during the school day.

The policy says that Level I violations should generally result in in-school interventions instead of out-of-school suspensions. Those alternatives include peer mediation, in-school suspension, conflict resolution, restitution, community service and loss of privileges such as playing on athletic teams or attending school dances.

So, a kid who cusses out a teacher — or refuses to follow orders —  gets sentenced to some scary ol’ peer mediation ???  Or restitution that may or may not be paid back — $5 per month — over 42 months ???   No school dance?  What does that do to a teacher’s level of authority in a classroom, when cursing at a teacher gets you, basically, a slap on the wrist?

How about some respect for the kids who actually want to learn something from the teacher?  How about some respect for the safety and well-being of the other kids?  No joke, here.  I have a friend who teaches fifth grade here in the area.  One day, two deputy sheriffs came into her room with a handcuffed boy.  They removed the cuffs from the boy, told him to take a seat — AND LEFT.  If those two cops thought the kid needed to be restrained, why in the hell would they release him into a room full of kids?

All of this reminds me of these New Age parents who count to three and threaten ‘Time Out’ to their screaming, rampaging darlings as they destroy restaurants and stores and hurt your ears.

Public education is not about teaching anymore.  It’s an extension of the welfare state.  It’s about scooping up as much government money as possible.  Most of that money hinges on how ever many butts you have in classroom seats.  So, the edu-crats bust their butts to make sure they have as many butts as possible in those classroom chairs.

If the little darlings interfere with the learning process — put them out.  Make parents responsible for the actions of their little darlings.  Stop transforming our schools into a veritable prison yard for the sake of keeping the government money spigot open and flowing.

3 thoughts on “THREE STRIKES: Wake County schools aspire to be like NYC”