For the most part, we at Haymaker HQ had a pretty good election night.  A good chunk of the folks we were pulling for WON.

Pat McCrory.  The former governor and Charlotte mayor is convincing me that he travels around permanently with a dark black cloud over his head.  He got viciously spanked in the GOP primary for US Senate.  A few days later, he apparently tested for COVID.  The man CAN’T win.

RINO war against Conservatives.   We get lectured all the time about how we need to hold our noses and cast a vote “for the team.”  In other words, never mind that the GOP nominee’s positions on the issues differ very little from the Dem nominee’s.

Thom Tillis  boasted about dumping six figures into the effort to defeat Madison Cawthorn.  Phil Berger and Tim Moore raised funds to defeat Cawthorn.  Was ol’ Madison voting wrong?  He and Dan Bishop were the only consistent conservative votes in the whole NC delegation (with Ted Budd following close behind).  With Cawthorn on the losing end Tuesday night, the PACs behind the anti-Madison effort are turning their sights on Lauren Boebert (R-CO), another member of the House Freedom Caucus.

For what it’s worth, the RINO candidate in the race — state senator Chuck Edwards — used a NAZI analogy against Cawthorn on social media.  You expect that stuff from far-left Democrats,  but not in a GOP primary.

In  NC House district 73, Speaker Timmy had his caucus members taking the establishment favorite around their respective districts seeking campaign donations for her.  The House’s campaign arm spearheaded a slander attack against the conservative candidate in this race. Thankfully,  conservative Brian Echevarria overcame all that and delivered a vicious electoral beat-down to RINO Catherine Whiteford.

In the three statewide judicial races,  you had Justice Phil Berger, Jr. — aka “Baby Berger” — donating money to certain candidates in the judicial primaries and verbally trashing some candidates.  I swear, he and his daddy are starting to look more and more like Sheriff Buford T. Justice and his son, Junior, in those “Smoky and the Bandit” movies. 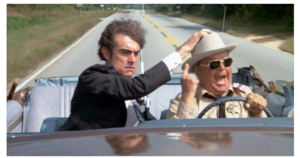 RINOs make no bones about not wanting us around.  They like having the ‘R’, next to their name, and they like the word “conservative” being used to describe them at campaign time.  (The *little people* really eat that stuff up.) But they have no use for any of the conservative planks in the party platform.  None. Nor do they want ANY conservative legislation coming through their respective chambers for a vote.

Conservatism made it cool to be Republican and vote Republican in North Carolina.  Now that the party is cruising at the top of the heap, RINOs are trying to return the NCGOP to the days when Republicans were pretty much contained in Charlotte and Greensboro.  You could hold the state convention in — maybe — a couple of phone booths.  It’s not about changing the world.  To them, it’s all about being the one who answers the phone when DC calls.

The big question?  How much longer are we going to sit around and take their abuse?

Lying is OK, apparently. It appears that an awful lot of primary voters don’t mind being “represented” by pathological liars.  Richard Hudson fabricated a whole “small business” background to cloak his real career as a lifetime political hack.  He also sent out mailers insinuating he was endorsed by President Trump.  (He wasn’t.) Hudson ended up winning big.

And then there is Greg Murphy.  His first campaign for Congress was arguably 95 percent lies.  This time, he tried to cover up those lies with even more lies.  Nevertheless, he still won big.

Good news for conservatives?  It appears that we had some conservatives replacing moderate Timmy-suckups in the NC House. In Moore County, we replaced Allen McNeill with conservative Neal Jackson.   Over on the coast, retiring Pat McElraft was replaced by Celeste Cairns, who got endorsed by the conservative Club for Growth in her recent congressional bid.  There were some others that ought to give us some hope for the future on Jones Street. 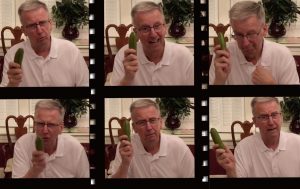 The folks on the coast also did yeoman’s work in ousting senator Bob Steinburg.  Steinburg had been bought and paid for by Big Solar.  He was a vicious campaigner who aimed more for personal destruction than electoral victory.  Steinburg promoted a college basketball tournament for Asheville, of all places, that looked a lot like a shakedown-for-cash effort leveled against groups in his district.  He threatened WAR against Dare County prosecutors and law enforcement for daring to prosecute his legislative assistant / campaign manager / Girl Friday on embezzlement charges.  Steinburg fit the stereotype beautifully of how most native North Carolinians view Yankees.

Congratulations to solid conservative Norm Sanderson for slaying the beast.

23 thoughts on “Thoughts on Tuesday (and the future)”