It’s pretty obvious the Left thinks people who spend their Sundays in church are kooks. (*Never mind Rosa DeLauro or Bernie Sanders.  Watch out for THAT guy over THERE! He teaches Sunday School !!! *)

You see it throughout pop culture.  Characters in movies and TV shows who pray, or even talk about praying, are portrayed as out there.  If they object to marital infidelity or,um, alternative lifestyles on the grounds of their personal faith beliefs, they are narrow-minded and bigoted.  Or hypocrites or scoundrels in the mold of Jimmy Swaggart or Jim Bakker. 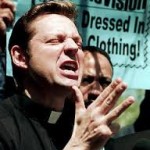 In 2008, we met Barack Obama’s preachers.  There was a loud black guy named Jeremiah Wright who sermonized about how America needed to be punished for its “crimes” and how white people needed to pay, too.  There was also  a Father Michael Pfleger who shared the pulpit with Wright.  Pfleger – a white man, himself, preached the Marxist line and inexplicably also sermonized about the evils of white people.  Right-minded people justifiably asked that Barry Obama’s frame-of-mind be examined closely, since he spent his Sundays being indoctrinated by these two charlatans.

Lefties and their driveby comrades told us Barry’s faith was his business and his business alone. It was immaterial to the campaign, we were told.  Faith should not be an issue in evaluating Obama, we were told, just like it was not with JFK.

Well, that all went out the window in 2012.  We got a whole lot of coverage of Mitt Romney’s Mormon faith.  We heard all about the “strange” beliefs of that denomination, and Romney was badgered to reassure us all that his Mormon beliefs would not be part of his presidential decision-making process.

Now, let’s look at how 2016 front-runner Ben Carson is faring with the drivebys.  He’s getting the same kind of rectal exam Clarence Thomas got during his confirmation hearing 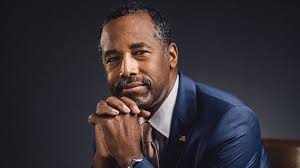 s.  *We just can’t have a high-profile black person refusing to worship the gospel of the welfare state and praise the Democrat Party!*

The Post article — on its face — would not, at first, be a surprise to anyone who regulary attends Sunday worship services.  There are many Christians who will tell you of times they believe God intervened in the lives.  But The Post decides to channel the venom of that non-funny  d-bag Jon Stewart with lines like this:

[…] 2. God gave Carson the questions and answers for a college chemistry test. […]

*Classy.*   And here’s more *classy* goodness from a leftist web site about Carson and the Seventh Day Adventist faith.

And here’s a contributor to Forbes’s website claiming Carson — in a 1998 speech — suggested space aliens built the Egyptian pyramids.

It’s incredibly,um,  *heart-warming* to witness this mud-slinging, hatred, slander and venom from the crowd that lays the claim to “compassion” and “sensitivity” in American politics and society.

4 thoughts on “Those CHURCH people”