check out what he  is up to regarding Trump’s immigration reforms:

Business advocates who want to import more foreign consumers and more foreign workers are developing plans to counter President Donald Trump’s popular call for a merit-based immigration reform.
The emerging strategy is to pair offers of minor concessions to Americans and Trump with demands for giveaways to business, including a bigger supply of low-wage workers and welfare-funded consumers. The immigration “pairing” strategy is being pushed by the industry-backed Business Policy Council, in cooperation with GOP Sen. Thom Tillis.[…]

[…] The strategy collides with Trump’s emphasis on raising Americans’ wages via “merit-based immigration,” which is also backed by a new productivity-boosting immigration drafted by two GOP

Senators, David Perdue and Tom Cotton. “Real and positive immigration reform is possible, as long as we focus on the following goals: to improve jobs and wages for Americans, to strengthen our nation’s security, and to restore respect for our laws,” Trump told Congress February 28.

The business push for “pairing” creates a risk for the many Americans worried about cheap-labor migration, said Mark Krikorian, the executive director of the Center for Immigration Studies. President Trump “has the potential to be taken to the cleaners by [Sen.] Chuck Schumer because [immigraton] is something he doesn’t know anything about… hopefully [Steve] Bannon and [Stephen] Miller will prevent this from happening.”

Tillis and lobbyists at the BPC described their emerging “pairing” strategy at a recent press event. 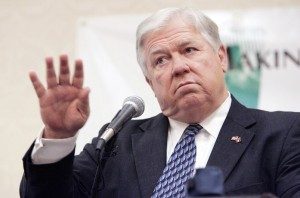 “We have to have border security,” Tillis said in a conversation with Haley Barbour, the co-chair of the BPC’s immigration advocacy task force, who also runs a lobbying firm, the BGR Group. Tillis continued:

To me, it is absolutely essential [border security] be one of the first measures that we pass. Now the question is what can we pair with it that will start creating some sort of consensus going … around a series of other things that we can talk about, but we are not going to put in the [first] bill because if it gets too convoluted, if it becomes too comprehensive, than it starts falling apart.[…]

Oh, gee.  Thom is teaming up with Haley Barbour on this TOO.  (*What could go wrong?*)

8 thoughts on “Thilli$$$: Standing up for the “little guy” (from the US Chamber & Mexico)”